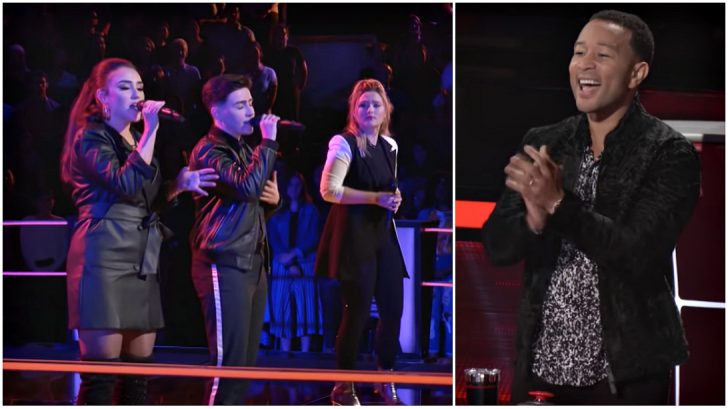 The Voice Battle Rounds are well underway, and the coaches have begun to trim their teams with heartbreaking eliminations. During Tuesday night’s Battle Round episode we saw the season’s lone sibling duo’s Voice dreams come to an end.

Twins Dane & Stephanie battled it out with Arkansas teen Marybeth Byrd as they sang Cam’s hit country tune, “Burning House.” The audience and judges alike were entranced as the trio, all part of John Legend’s team, sang in pitch perfect three-part harmony. The result was a standing ovation and high praises from the judges.

“The three of you together are magical,” Kelly Clarkson said, but eventually told Coach John that she would choose Dane & Stephanie to advance.

Blake Shelton agreed that the singers nailed their performance, but went to bat for Marybeth Byrd who he predicted would be in the show’s finale.

“I am putting my bet on Marybeth to be in the finale. I think she has everything it takes to win the show,” Shelton said of Byrd who earned a coveted four-chair turn during her Blind Audition.

When it came time for John Legend to reveal who he was choosing to move forward with, he said, “First of all, I have to just say how proud I am to be a coach for all three of you. You made everybody feel all of the emotions. Very few people have gotten standing ovations from all of the coaches. With Dane & Stephanie, I feel like the confidence grew, the execution was better, it was just really lovely to watch. And Marybeth, it’s just amazing to hear someone at 18 singing with that level of maturity and control. You’re just a really gifted vocalist.”

“This is a tough decision,” John stated before announcing, “the winner of this battle is Marybeth.”  He later explained, “I had to pick Marybeth. She’s undeniable. She has that control, that versatility and that just raw vocal ability. I think she can go really far.”

Listen to Dane & Stephanie and Marybeth Byrd perform “Burning House” in the video below. Let us know if you think John Legend made the right decision.