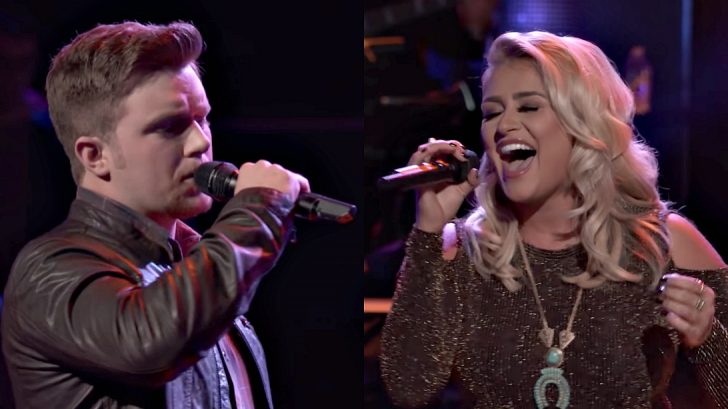 The Voice Battle Rounds never disappoint. It’s the first round of head-to-head competition during the season, and it gives viewers a chance to see the hopefuls duke it out in a back and forth format as they sing a song chosen by their coach. The Season 16 Battles have continued the tradition of providing us incredible cover performances, but we’ve had to say goodbye to some of our favorite competitors along the way.

Two of Season 16’s favorite artists happen to be on Team Kelly and both are hard core country artists. It was a smart move for coach Kelly to pair Jackson Marlow and Abby Kasch up for a battle on the country hit “Bring On The Rain.”

Illinois native Abby Kasch first wowed us during her Blind Audition where she showed off her sassy side with a stunning cover of Gretchen Wilson’s “Here for the Party.” Her audition left Blake Shelton and Kelly Clarkson fighting over her, but she ultimately chose to join Team Kelly.

18-year-old Jackson Marlow, nephew of Season 13 finalist Red Marlow, proved his country roots run deep with a smooth cover of George Strait’s “Troubadour” during his Blind Audition. Marlow earned the final spot on Kelly Clarkson’s team, giving the coach the male country artist she was holding out for.

“Bring on the Rain”

In 2001, just one day before the September 11 attacks, JoDee Messina released “Bring on the Rain.” It sat on Messina’s Burn album for over a year before being released as a single. The empowering song became an unintentional anthem following the terrorist attacks and would become one of Messina’s most beloved releases.

Messina enlisted the help of longtime friend and former Curb label mate Tim McGraw for “Bring on the Rain.” The collaboration earned JoDee her fifth chart-topping single and garnered a Grammy nomination for Best Country Collaboration with Vocals.

During rehearsals for their Voice Battle, Jackson Marlow was visibly nervous as he admitted that he wasn’t able to sing harmonies. But, advisor Kelsea Ballerini and coach Kelly Clarkson put his mind at ease by letting him know that some of the best singers in the industry aren’t able to sing harmony.

Marlow confidently took the stage with Kasch during Monday’s Battle Round and once again showed off his classic country sound. But, it was no match for Kasch who pulled out all the stops for her performance.

“You both hit me in completely different ways,” Kelly told the singers following their performance. “I loved the richness of Jackson’s voice and Abby, I love that it’s just unbridled. I knew this was gonna be a hard one for me. Although I think both of you are seriously talented, the winner of this battle is Abby.”

Marlow was arguably the most country artist in the competition and was one of the viewers’ favorites coming out of the Blind Auditions. We were sorry to see him go.

Watch Jackson Marlow and Abby Kasch sing “Bring on the Rain” in the video below. Do you think Kelly Clarkson made the right decision?