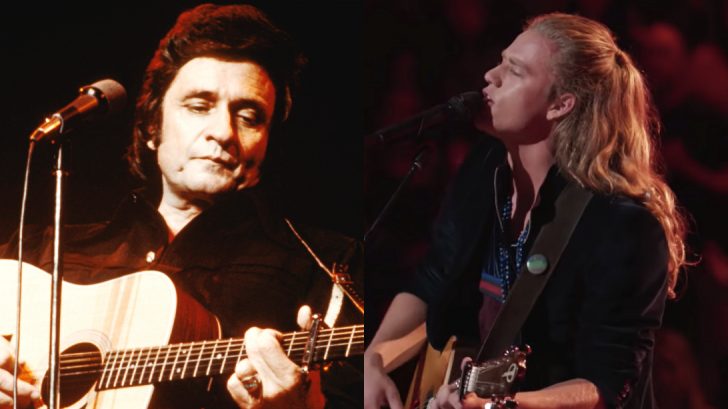 What do you get when you mix an avid surfer from Hawaii and Johnny Cash? You get a performance unlike anything you’ve ever heard before. Such was the case when Aloha State native Tyke James took the stage during Monday night’s Knockout rounds on The Voice.

James is a member of a Hawaii-based alternative band and won over coach Adam Levine during the Blind Auditions with his unique sound.

“Dude, you could win this thing in your sleep. You have an extremely modern voice, but it’s classic and old school as well,” Levine told the 17-year old following his audition cover of “Perfect” by Ed Sheeran. “Bro, get ready for a ride. We’re going to have such a blast.”

So far, Adam Levine has stayed true to his word and brought James along for the ride. The veteran Voice coach chose James as the winner of his Battle Round two weeks ago after a smooth, laid back performance of Billy Joel’s “She’s Always a Woman.” Adam again chose to keep the teen on his team after Monday night’s Knockout Round where he performed a rendition of Johnny Cash’s “Ring of Fire” that had some country music fans up in arms.

#TheVoice
Tyke, Ring of Fire? Hey, I grew up with Johnny Cash.
I love your type but you ain't the Man in Black.

But, the response to Tyke’s performance was overwhelmingly positive and fans can’t seem to get enough of his voice or his flowing locks.

I just woke up from an accidental sleep into the dreamworld of the Keith vs Tyke knockout round on #TheVoice. Wow, that Ring of Fire cover was smooth and heavenly. Great choice, man. @adamlevine ?

This kid Tyke has some of the most beautiful blond hair I have ever seen. …and Im really not into blond hair. He is gorgeous #thevoice

One thing is certain: Nobody else on The Voice, possibly on Earth, sounds like Tyke James. His one-of-a-kind vocals could very well win him the coveted Voice trophy and give coach Adam Levine his first win in six seasons.

Hear Tyke James’s captivating performance of “Ring of Fire” in the video below.