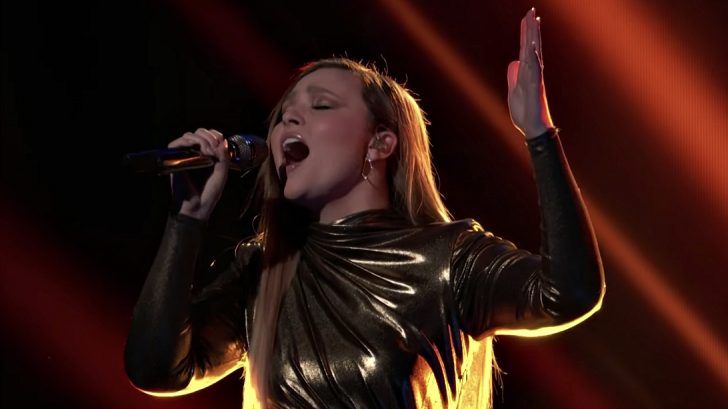 Monday night’s episode of The Voice delivered one of the most heartfelt and emotional moments we’ve seen on television in a long time. Arkansas native Marybeth Byrd fought through tears to honor her late grandpa with a performance that we won’t soon forget.

Prior to taking the stage, Byrd confessed that it was going to be a challenge to get through her performance of Vince Gill’s “Go Rest High On That Mountain.”

“The day before I flew out here, my grandpa passed away. I miss him every day. … I wouldn’t be on The Voice if it wasn’t for him showing me his love for music. … I can’t think of a better way to honor his memory than to do what he wanted me to do since the day I was born. I know he has the best seat in the house for Monday,” Marybeth said.

The singer struggled to make it through rehearsals, but coach John Legend encouraged her to fight through it and share her grief with her audience.

Marybeth followed her coach’s advice and bravely opened her heart, fighting tears through her entire performance before breaking down at the end.

“I was just talking about that particular song today and what it meant to me through the memory of my dad, so I know how you feel trying to get through it,” Blake Shelton told Marybeth afterward. “I can’t even listen to it sometimes, because it’s so heartbreaking. Great job, sis.”

“We talked about how hard it was going to be to do this song, and  what I told you then is what I’ll tell you now,” said John. “You can share your grief with America, and they can see all the parts of you that make you who you are as a person, and who you become as a singer and musician. It’s because of your grandfather in part, and America got to see all that. It was beautiful. What a wonderful performance.”

Tuesday night (November 19), the Top 13 will be narrowed down to 11. If the social media response to Marybeth Byrd’s performance is any indication, she won’t be eliminated from the competition anytime soon. Check out Marybeth’s emotional rendition of “Go Rest High On That Mountain” in the video below.