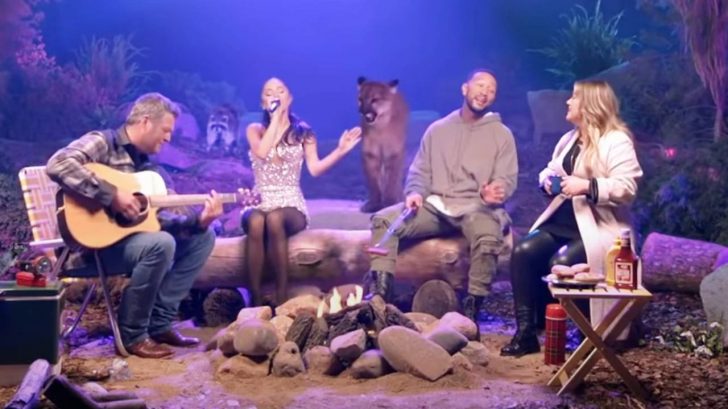 Season 21 of The Voice kicks off on September 20th with coaches Blake Shelton, Kelly Clarkson, and John Legend returning to their iconic red chairs. A new face will join them, pop star Ariana Grande.

On Monday (July 26), Kelly Clarkson posted a teaser and a couple behind the scenes clips of the first promo she and the other coaches filmed together for Season 21.

In the clip, the four coaches were hanging out at a campfire, singing songs, though we didn’t know what song they were singing…until now! On Tuesday (July 27), The Voice, and all the coaches, shared the full promo.

Like Clarkson explained in the teaser, she, Shelton, and Legend were sitting around a campfire. They notice a shining star in the sky. Legend asks if they see a certain star, but alas, it is Ariana Grande sitting on the moon in a silver sparkly dress.

Once Grande joins her fellow coaches around the campfire, Clarkson informs her there is a tradition that the new coach has to sing a song.

“Oh no, I couldn’t possibly,” Grande says before whipping out a microphone and beginning to belt “Hopelessly Devoted To You” from the movie musical Grease.

After the first line, Shelton, Clarkson, and Legend joined in for harmonies and some “Oohs” and “Aahs.” In the middle of the song, Shelton says, “This is going to be an amazing season.”

The camera cuts to host Carson Daly wearing a park ranger outfit looking at the crew through binoculars. He is joined by a scary looking bear who then busts out singing, too!

Watch the promo below.