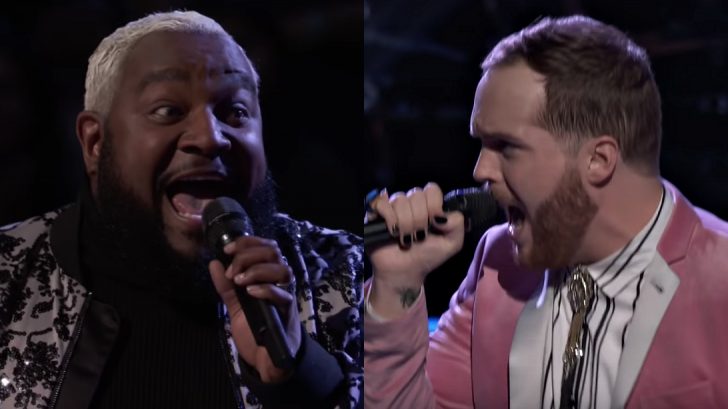 It’s hard to believe that The Voice Season 15 Battle Rounds are upon us. During this second round of competition, two members from the same team will go head-to-head singing a song chosen by their coach. One team member will advance to the next stage of competition, and the other leaves the competition. As you can imagine, the pressure makes for an intense sing-off round.

In a leaked preview of one Battle Round performance posted to YouTube, coach Jennifer Hudson pitted two of her team members against each other to sing fellow coach Blake Shelton’s song “God Gave Me You.” The song was Blake’s 10th No. 1 song and the official music video featured his then-fiancee Miranda Lambert. “God Gave Me You” was extremely meaningful for Blake in 2010 as it gave him the courage to propose to Lambert.

“God Gave Me You’ is an important song for me for this record,” Blake told The Boot prior to the song’s release. “I had flown into Dallas, Texas and got into my truck and was driving back to Oklahoma … It’s no secret, Miranda and I have had our ups and downs over the years and this was definitely at a low point at our relationship. But, I heard that song come on the radio — for whatever reason I was flipping through stations and landed on a contemporary Christian station, and that song came on and I almost had to pull the truck over. It was one of those moments for me where I felt like I was hearing that song at that moment for a reason.”

Shelton called his producer Scott Hendricks and told him that he had to record the song. And, he did. It became one of the most beloved songs on his Red River Blue album and continues to be a popular wedding song.

Shelton and Lambert divorced in 2015 after four years of marriage. Following their split, many media outlets pulled their “God Gave Me You” music video as it featured Lambert delivering a heartfelt message to Blake just before their wedding. “In less than 36 hours I’m getting married. I’m getting married to you, Blake Shelton,” Miranda says in the video opening. “We’ve made it through the unthinkable. We’ve made it through everything we could possibly make it through. I know we have a lot more trials and tribulations to go, but I’m ready to join in with you on that journey.”

During this week’s Battle Rounds on The Voice, two contestants will breathe new life into the song with a cover unlike anything you’ve ever heard before. Colton Smith and Patrique Fortson kick off the familiar tune in a smooth, low-key fashion, but as they progress into the second verse they pull out all the stops with flawless harmonies and unthinkable falsettos. Coach Blake Shelton sat emotion-less throughout most of the performance, but couldn’t hold back a “wow” here and there as if he were hearing his own song for the first time.

As the song concludes, Smith and Fortson’s coach Jennifer Hudson takes off one of her sparkly high heels and throws it at the stage. While some think that shoe throwing is an insult, Hudson made it clear in an interview last year that getting a shoe thrown at you is a great compliment.

“It is a compliment. At J Hud Productions, it is a compliment,” Hudson told Late Night host Seth Meyers. “If you move me enough that I remove my shoe to throw it at you, you have done something amazing. It is equivalent to a standing ovation.”