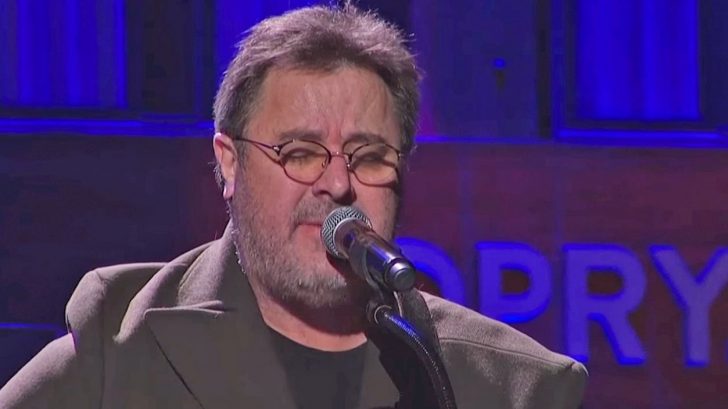 The loss of Eagles co-founder, Glenn Frey in 2015 was devastating to all in the music industry, but even more so to those who had known Frey in a much deeper way.

Premiering on SHOWTIME this Fri & Sat at 8PM: History Of The Eagles Part One and Two

A longtime friend, and fellow musician, Vince Gill was one of the people that knew Frey well and was affected deeply by the loss of someone so incredibly talented.

The country crooner performed one of the most beautiful and emotional tributes to Glenn Frey that you’ll ever see. Gill performed this touching tribute at The Grand Ole Opry just a few days after his death. Frey had been battling some health issues prior to his passing, and ultimately succumbed to complications from them on January 18, 2015.

“Peaceful Easy Feeling” was launched in 1972 as the third single from the Eagles self-titled debut album, and remains one of the band’s most popular songs – and a top request from concert attendees. Frey sang the lead vocals on the original band recording which made it the perfect choice as a tribute to his successful career.

Hey #IOTA
I've got a Peaceful, Easy Feeling,
and I know you won't let me down…

Heading to downtown Toronto to see The Eagles in concert tonight. So pumped. pic.twitter.com/W1FAsw0ogQ

Gill does an incredibly beautiful job honoring Frey’s memory on the hallowed Ryman Auditorium stage and easily brought a tear to many eyes in the audience. Filled with love and emotion he sings, “Peaceful Easy Feeling.”

On tour, Frey’s son Deacon sings lead on this particular song, with Gill playing guitar beside him. Watch it below.