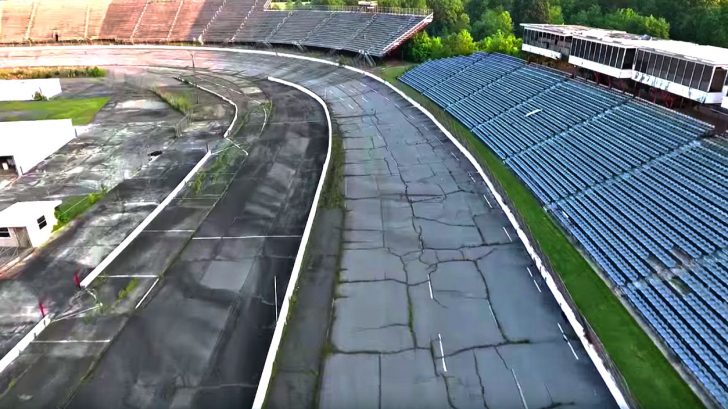 First opened 70 years ago, this iconic part of NASCAR’s history has been completely forgotten about and is falling apart – piece by piece.

One of the biggest tracks in the rising of NASCAR’s empire, North Wilkesboro Speedway was opened at the beginning of NASCAR history in 1947 – only to be closed in 1996 after a final Winston Cup Series race, won by Jeff Gordon.

The track was one of NASCAR’s most unique and featured an uphill backstretch and downhill front-stretch, measuring a total of 0.625 miles, but the roots of this infamous track weren’t initially set in NASCAR, but rather in the early days of Prohibition where it was a dirt oval used by moonshiners to test their liquor cars.

Opened as a dirt raceway in 1947, the iconic France family promoted the first official event as a modified race, and blew the roof off of attendance expectations, reeling in more than three times the crowd they had planned for.

Continuing on as one of the foremost speedways in NASCAR, North Wilkesboro eventually was paved and updated with grandstands and other more modern amenities. It hosted the top series, NASCAR’s Winston Cup for a total of 93 races until its closure in 1996.

The historic track reopened in 2010 for a few smaller Stock Car Series races, but shut down in the spring of the following year. When North Wilkesboro Speedway first shut down, it was due to a number of issues including the massive growth of NASCAR as a whole, and the size of the track. Other factors, like economics behind upgrading it with newer amenities and repairs also factored into the closure.

Watch the video below that shows off some rarely-seen sides to this abandoned track, and check out the Race Hub feature to learn more about its history, too.