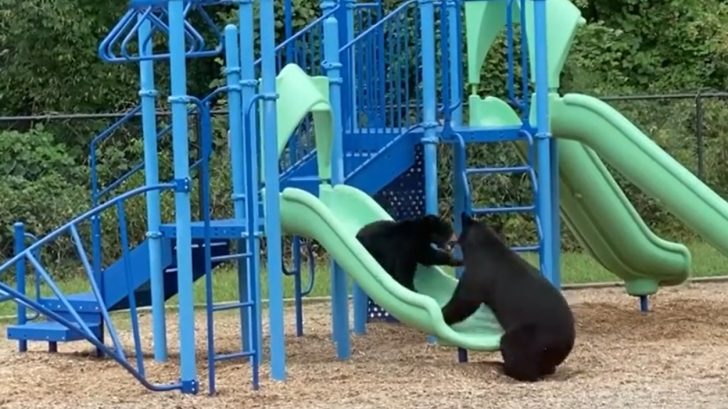 5th-grade teacher at Isaac Dickson Elementary School in Asheville, North Carolina, Betsie Stockslager Emry filmed a video of a couple of bears playing around on the playground.

“This MADE MY DAY – playground at school… watch the whole thing!!” Betsie wrote on Facebook.

The elementary school is located in western North Carolina near some dense forest.

The smaller bear was presumed to be the mother’s cub. They both played together very friendly and the cub tended to follow the mama around on the playground. The mother stood at the top of the slide and then waited for the cub to come down to play with it.

“I love how the mama goes down the big slide and quickly runs to the smaller slide — only to bear hug the little one as they make it to the bottom,” Betsie said.

The footage was taken at the end of the day while the students and Betsie was leaving campus. Mandatory classes had been dismissed but there were still students on campus doing after-school activities. According to the school officials, everyone was safe and inside during the time the bears were on the property.

“We often have bears visit: our school is in downtown Asheville, and the students are used to going into a perimeter lockdown when the families show,” Betsie said, according to Charlotte Observer. “The voices in the video are teachers enjoying the moment.”

Watch The Bear Footage Below