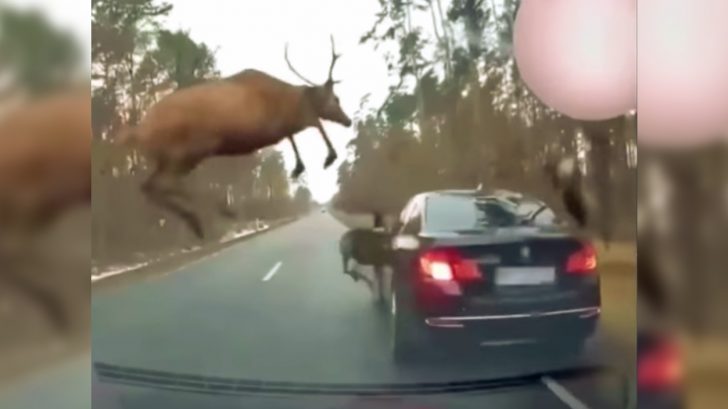 Oakland County Sheriff’s Office shared some crazy footage of a herd of deer “flying” over cars as they drove down a rural road in Michigan.

The video showed the deer in a full sprint as they intersected the cars and some of them were moving so fast and jumped so high that they actually leaped over the car. A camera attached to the dashboard of the vehicle showed the car in front of it slam on its brakes and swerve over as it drove into the herd of deer.

Fortunately, the car missed most of the herd, however, one of the deer ran into the left front side of the car while another deer jumped onto the back of the vehicle’s trunk. The good news is that the deer and people were not injured during the incident.

“This goes for making a crazy day. It looks like no one was hurt and all the animals we’re OK at the end of it, but I am sure there was some very fast beating hearts! Another reminder you have to always be in control of your car and not distracted by anything else,” Oakland County Sheriff’s Office wrote on Facebook.

The deer that jumped onto the back of the car can be seen the best in the video. It caught some really good air and it’s amazing to see how high they can jump.

Watch Footage Of The Deer “Flying” Below