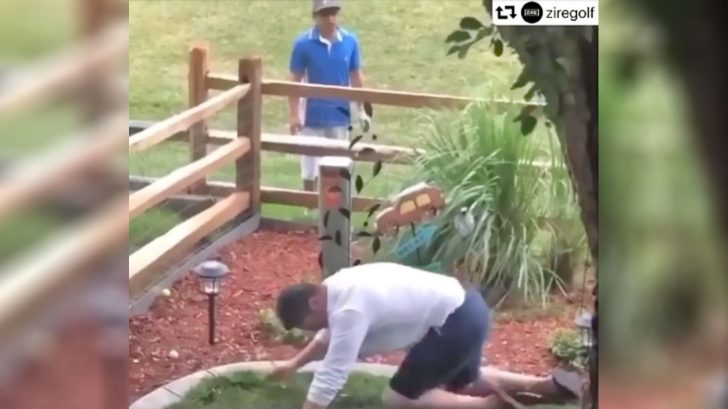 Golf is generally viewed as a sport of leisure and class but that’s not always the case. When hilarious moments do happen, word tends to get around fairly quickly in the golfing community.

One funny golf moment didn’t technically happen on the course, but rather in a family’s backyard that’s next to a golf course. According to a Snapchat video uploaded and shared to Facebook, the children of one truly hilarious dad filmed a prank he likes to play on golfers who go a bit out of range.

“When someone hits a golf ball in our backyard, my dad goes and lays next to it,” they wrote captioning the video as they could be heard howling with laughter watching the prank go off.

The video shows the father laying down next to a golfball that was hit out of bounds, and into their backyard. As the golfer comes up to retrieve the ball, he comes across the dad laying flat out on the ground, rubbing his head, and wincing in pain as if he was struck by the rogue ball. The confused golfer obviously had no idea how to react which makes the whole thing pretty funny.

Funny golf moments don’t just stop at dad jokes though. You never know what can happen on the course – or what can walk across it.

Watch the video below for more hilarious golf moments.