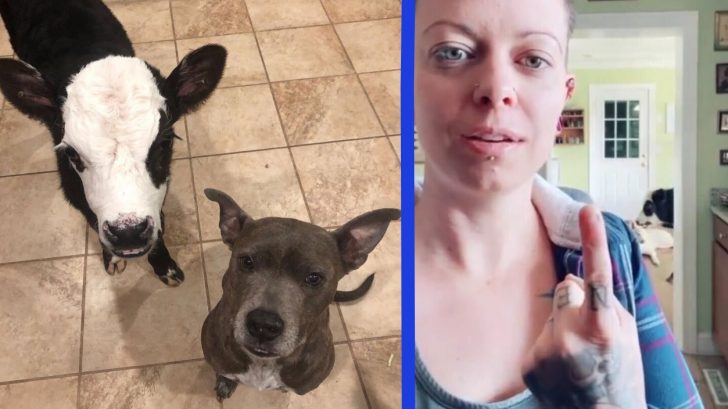 As a veterinarian, Nicole Fredericks has a strong passion for healing and saving domestic and wild animals. Living on a farm she is surrounded by cats, dogs, chickens, goats, pigs, and a cow called Sven.

Sven is a unique cow in Nicole’s eyes. He joined the farm as a calf and quickly integrated into the family of animals. He loves running next to the farm’s rescue dogs as if he’s one of them and even follows them inside the house to cuddle on the floor.

“He just loves pats of all kind. Did you know if you scratch an itch they kick their foot like a dog?” Nicole posted on Instagram.

Nicole shares several pictures and videos with Sven and one of them went viral where you can see Sven opening the door of the house and trying to sneak past Nicole.

Nicole shared with her followers on Instagram, “Did you know that cows only have bottom teeth and can open door knobs?”

According to Nicole, Sven is a smart cow who knows what he wants: to stay inside the house like her best friend, Drake, the rescue dog. One time, while Sven was ill, he got to stay in the laundry room until he recovered. Ever since then, Sven seemed to find a way to open the front door of the house when it’s unlocked, even if it’s forbidden for him to come inside.

“Anytime the door is open longer than a few minutes he will make a break for it. Cows are super, super curious animals (worse than cats),” Fredericks told The Dodo.

She says he slips on the hardwood floors and to protect him from injuring himself when he sneaks into the house, Nicole uses tasty cookies to lure him back out into the yard.