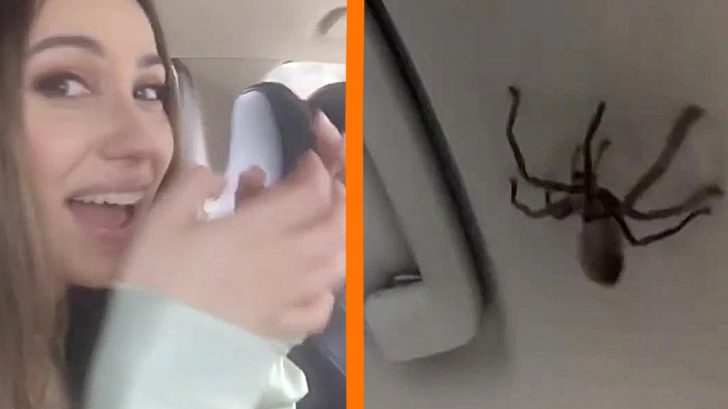 Some girls are comfortable around spiders. However, others aren’t so fond of them and when they see one and it’s close to them, it can be a very terrifying experience.

One young lady riding down the highway in Sydney, Australia with a group of her girlfriends filmed a hilarious video of the girls panicking after realizing a spider was in the car with them.

The video starts off showing the spider clinging onto the interior walls of the vehicle as the girls scream and yell over it. One girl sitting in the backseat films the spider as another girl tries to pile on top of her to get away from it.

“Bella, Bella, open your window!” One of the girls screams. “You’re going to have to hit it outside! Don’t let it crawl this way.”

The spider started to crawl across the ceiling and that’s when they really panicked. They pulled the car over and everyone got out. One of the girls grabbed a stick and went back into the vehicle in an attempt to get it out. She was able to successfully get the spider into a position to fling it out of the car and it landed on the road. At this point, the spider appeared to be lifeless as they poked it with the stick before getting into the car and driving away.

Take A Look At The Video Below