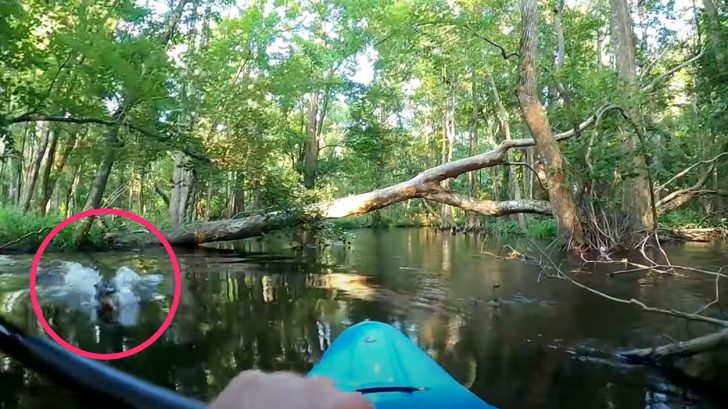 Imagine you’re peacefully enjoying nature on the river in your kayak. The last thing most people think about is an alligator attacking and flipping your kayak over. For one adventurist, that might be all he thinks about for a while.

Peter Joyce was enjoying a nice leisurely paddle down the North Carolina’s Waccamaw River. His GoPro footage is downright relaxing as he’s surrounded by nature. Suddenly, out of nowhere, an alligator charges his kayak flipping it over. For a second, the camera is underwater, then the kayak is returned to its proper position. There’s no further sign of the gator but Joyce’s heavy breathing continues. The entire incident is captured on his camera. Good thing for Joyce the kayak was between him and the gator or possibly things could have been worse.

In North Carolina, male alligators can reach up to 13 feet in length and weigh 500 pounds or more. Females generally grow to less than nine feet and weigh up to 200 pounds. They occur naturally in North Carolina, inhabiting bay lakes, rivers, creeks, marshes, swamps and ponds, with local populations distributed in patches along the entire coast.

If in your life you have never heard the sound of an "American alligator", that is it??.. pic.twitter.com/MrMAdb2y5G

North Carolina residents, John and Lisa McNeill founded the Alligator Alliance in order to spearhead conservation efforts for gators in their state. They remind people that, as an indigenous species to North Carolina, alligators play an important role in the ecosystem. They explain,

“For the most part, alligators are misunderstood. If we all use a common-sense approach, we can co-exist with them. This means, be aware that any body of water in our coastal regions has the potential to have an alligator in or near it. It also means stay away from them, do not feed or harass them and of course, keep children and pets away from them.”

Luckily for Joyce, this particular alligator didn’t feel the need to take any further actions against the visitor in his river. Watch the entire incident in the video below.