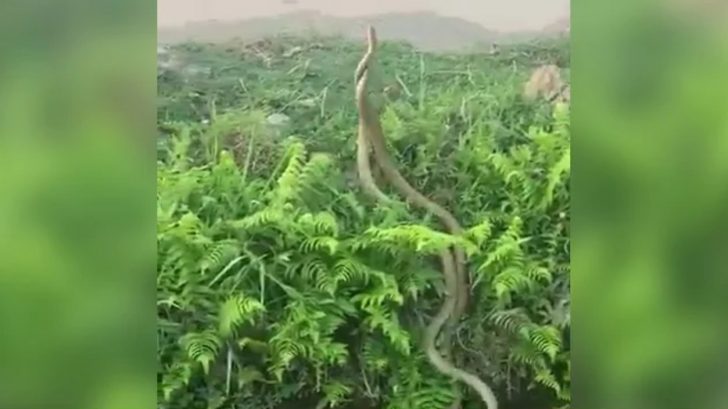 On July 30th, 2020, a video of two snakes wrapping themselves around each other in the water and then on the land was posted on Twitter. The video posted by an Indian Forest Service officer Susanta Nanda went viral on the internet getting 12.8k views, 764 likes, 149 retweets, and 68 comments as of August 4th, 2020.

The two snakes are identified as rat snakes, which are medium-to-large nonvenomous snakes that kill by constriction. They are found in North America, from Central America to Southern Canada.

At first glance, the two rat snakes may seem like they’re dancing or doing a mating ritual. The reality is that they are fighting it out for dominance.

During the battle, the two snakes have their heads raised high above the water before they move into the grass. They try to rapidly loop around each other to slam the other snake into the ground. It is a serious fight that leads to the winner marking his territory and having a better chance at reproducing with female snakes in the area.

Even though snakes are known to do battles, they are not the only animals to go for wrestling matches. Mooses are known to go head-to-head in combat, lizards are known for brawling in the streets and many other animals duke it out for mating rights. Check out the snake battle below!