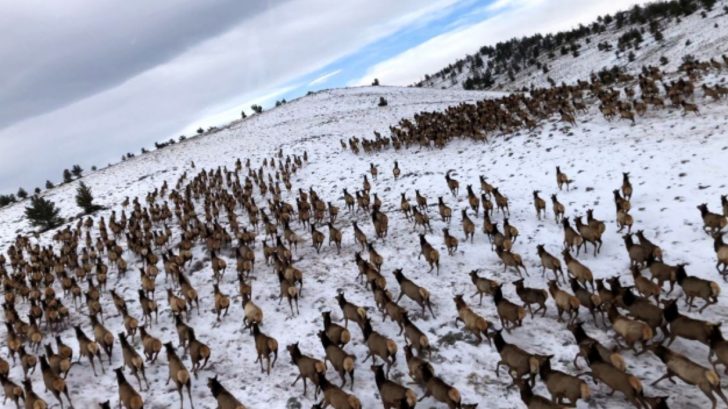 For the first time since 2006, Colorado Parks and Wildlife biologists surveyed the elk population in Larimer County, Colorado, by helicopter and what they saw was amazing.

Angelique Curtis, a biologist for Colorado Parks and Wildlife, counted elk for several hours in a Bell 407 helicopter on Thursday, January 6th (2021). It took her and the pilot several hours but Angelique was able to classify around 4,200 elk in the collective herds that they spotted.

“In order for us to properly classify them, the pilot has to go in there and actually carve off a group of 35 to 40 elk at a time and then his job is to keep those elk separated from the main herd,” Angelique said in an interview on YouTube. “So when we are doing this it is definitely the pilot and his skills that get us the data we need.”

Officials were worried that the Cameron Peak Fire that started in August and ended in December. As the largest fire ever to burn in Colorado, it may have hurt the elk population. However, that was not the case. After investigating the area and the herds, they found that the elk population was still healthy.

“What we saw today is that the fire didn’t inhibit them from actually getting to their wintering ground and we saw some pretty good calf recruitment. We did see healthy animals on the ground, so the fire didn’t seem to affect them health wise,” Angelique added.

It was a beautiful sight to see all the elk running together. Take a look below at the full footage from the helicopter ride and hear an interview with the pilot and Angelique.