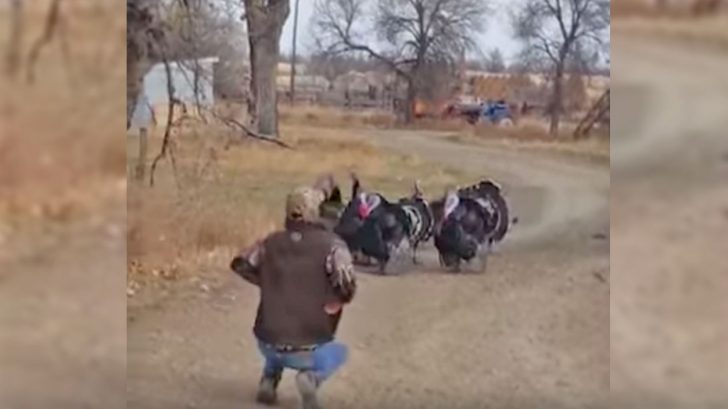 It’s not unusual to see humans trying to communicate with animals. From farm pets to indoor companions, owners everywhere love trying to figure out what their animals are thinking.

While that might be more of a norm, it’s not every day you see humans and turkeys hanging out. Well, one Montana teen decided to spend his afternoon getting to know some wild turkeys.

Glasgow, Montana isn’t known to be home to turkeys, but a flock of them appeared in November of 2017. While hunting there, a teen and his friends were in awe of the number of turkeys they encountered, and they decided to get close to them. The teen explained what happened next:

“On our way back to the truck I said I should strut at them and began calling with only my mouth. They began to work out way and I seized the opportunity to have a little fun and the show began!“

As the turkey whisperer mimicked their sound, the flock started to call back. In a hilarious turn of events, the teen crouched down and started walking toward the birds, still calling out to them.

In his jeans, camo hat and boots, the turkey whisperer tricked the turkeys into thinking he was one of them!

Slowly but surely, the teen and the flock of confused turkeys meet just feet away from each other. With every call he made, the turkeys weren’t far behind in echo. With every step the teen took, the turkeys followed him!

Watch this hysterical video of the turkey whisperer below.