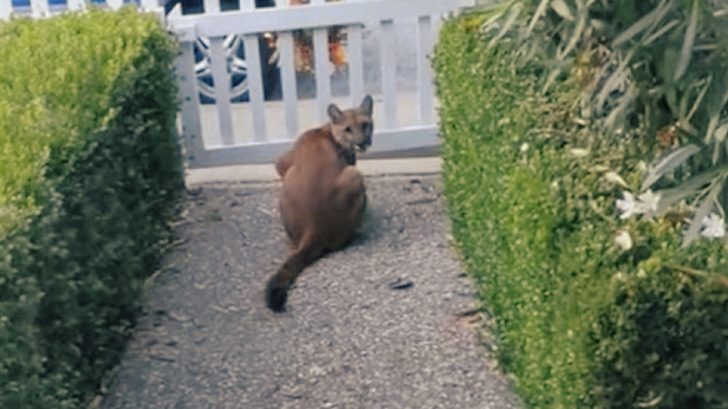 Timothy Kerrisk was at his home in Pacifica, Californa watching kids ride bikes up and down Mason Drive when he noticed he wasn’t the only one watching them. A mountain lion was also crouched down in his front yard stalking the youngsters as well.

“I was terrified,” Timothy told NBC Bay Area. “I was really afraid for the kids.”

As Timothy recorded the mountain lion with his phone, he opened the front door to try and shoo it away. The cat heard the door making noise and took its eyes off of the kids and locked them onto the door.

Not feeling as secure as before, the cat decides to move to another location and hops Timothy’s fence. At this point, Timothy decides to open the door and go after the cat to protect the kids. He spots it hiding behind his vehicle and yells at it to “get out of here.”

“It was just pure adrenaline. I just came out and was like, ‘No, no, no, get, get, get.’ And I was just chasing it like you would like a regular cat, ‘Get out of here, get, get.’ And luckily it turned and just kept going.”

Timothy ultimately shooed off the mountain lion and says he’s grateful nothing bad happened. Take a look at the footage he filmed below.