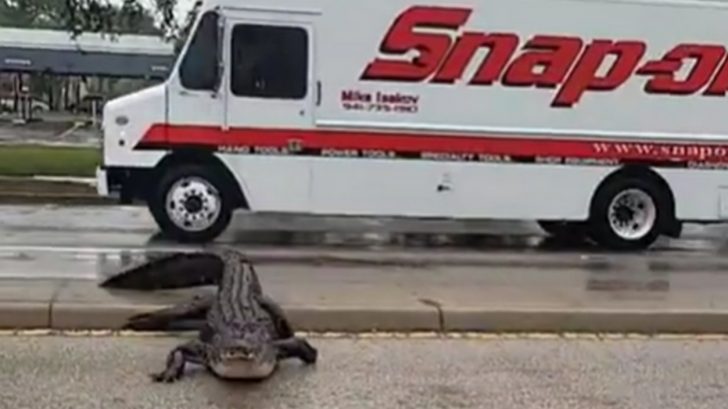 Daniel Jay Kaufman was sitting at a red light in Venice, Florida on Thursday when he filmed a 10-foot alligator making its way across the road coming directly at him.

He rolled down his window to film the gator as it stopped traffic to cross the road. Daniel stayed parked as the gator kept moving closer and closer until he realized the gator was not changing its course.

Miami Herald reported Daniel saying he “was wondering if he was going to try and get in through my window. Didn’t know what was going though his mind. I was in total shock at how big he was and how brave.”

The gator was missing one of its feet so instead of going around his truck, the gator decided to go directly under it while Daniel was still sitting in it. Within a few seconds, the gator vanished under his vehicle and moments later he felt his truck moving around.

“Just moved my truck. Are you kidding me?” Daniel said in the video.

The gator was apparently too chubby to easily squeeze underneath the vehicle and it was scraping and bumping up against the bottom.

“When he was probably three-quarters of the way under my box truck, I felt a little wiggle or shake from under truck,” Daniel said.“By this time, the light is green and no cars were in front of me. I couldn’t move because I didn’t want to hurt him under my truck. For a second, I was thinking he might stay there. I stayed till he was fully clear of my truck and a safe distance away.”

The gator eventually finished crawling to the other side of the vehicle and continued on with its journey across the road. Daniel said the incident took place around 5pm on Jacaranda Boulevard while he was on his way home from work.

Fortunately, the truck’s underside was not damaged during the incident.

After posting the video to Facebook on April 7, it has been viewed more than 245,000 times since.

Florida wildlife experts said that mating season has officially begun and gators are in the courtship phase that begins in early April, so we can only imagine that he was probably on his way to find a mate.

Watch The Video Of The Gator Below