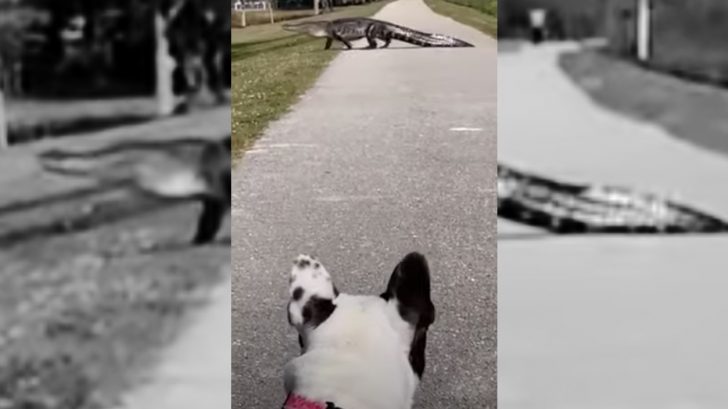 Meet Waffles, a 6-year-old female French bulldog from Naples Florida who was taking a stroll through a park when she spotted a large alligator crossing the walking path.

Why did the gator cross the walking path?

It happened on January 16 as Waffles was getting some exercise in along the lake at Eagle Lake Community Park. The gator appeared to be leaving a lake on the right of the path to journey to the other side of the path and enter another body of water.

The gator slowly walked onto the path, taking his time as Waffles’s walker filmed the dog watching the gator which was way bigger than the dog. As they watched and waited, the gator eventually made it across the path and walked down to the other body of water where it slowly submerged itself.

What an adventure for Waffles!

That’s not the only adventure we’ve seen Waffles participate in. She actually has her own Instagram account with 4.3k followers and over 1.1k posts that show many of the fun adventures and activities she does. There you’ll find a ton of cute pictures of Waffles in costumes, exploring Florida, and just having a good ol’ time.