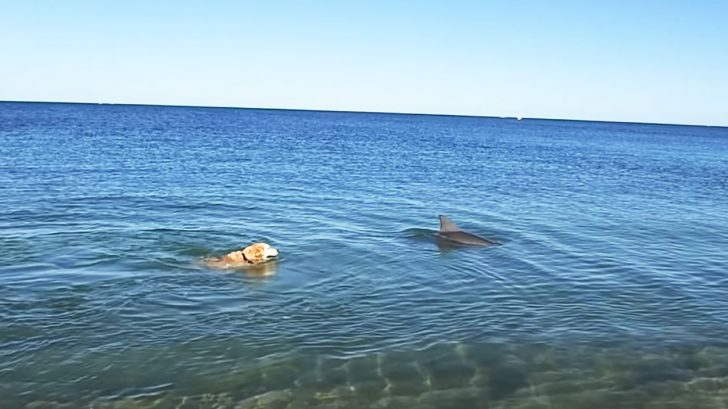 YouTuber Brett H was walking along western Australia’s Rockingham Beach when he spotted what he thought to be a child playing in the water. Upon approaching, he quickly realized it was a dog swimming with another animal. He immediately started filming with his camera and as he got nearer it became clear that the dog was interacting with a dolphin in the water.

The bottlenose dolphin has a reputation for being a friendly creature but interactions with other species like this don’t happen often. More than likely, the dolphin was swimming close to shore in search for food and became curious about the furry thing swimming in the water.

The dog itself was a golden retriever which is one of the most loving and gentle breeds. The owner informed Brett that this was the second time the pup had jumped into the water to play with a dolphin.

Brett witnessed the dolphin circling around the dog while the pup attempted to chase it. At one point, both animals appear to swim alongside one another.

From the video, it appears that both the dog and the dolphin are having a good time and enjoyed the interaction.
Watch the video of the encounter below!