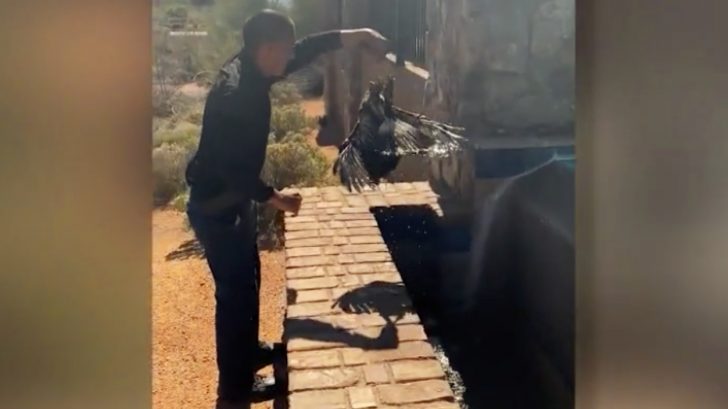 Steven Gonzales, who works for Truly Nolen was just doing a routine pest control service job for a client in Phoenix, Arizona, when he stopped everything he was doing to save a drowning hawk.

The pest control technician said it was just a regular day on the job when he looked over and noticed the hawk in the pool, splashing and bobbing around holding onto something.

“I see this hawk, and it’s just gripping, like, something in a pool, like a drain or something,” Steven said, according to FOX Phoenix. “It’s just, like, holding itself up, so I was, like, OK, what am I going to do?”

Steven was on the clock working but decided to stop what he was doing and walk over to the pool to grab the hawk while his partner trainee filmed the animal encounter.

“It lets me grab it by the legs, and I end up lifting it on my shoulder, and it kind of flaps its wings a little bit and just rests there,” Steven said.

The bird was very calm and seemed very grateful to have been rescued. It quietly perched on his arm as the water drained off of its soaked feathers and then he placed it on the ground to then further dry off.

“It just chilled there with me,” Steven said. “It didn’t want to leave my side. It just stayed right next to me.”

He decided to call a non-profit group that rescues birds called Wild At Heart to come transport the bird to a facility where it will be looked after until it becomes strong enough to be released back into the wild.

Steven said he is in contact with Wild At Heart who gives him daily updates on how she is doing. He has also to decided to sign up with the organization to help rescue other animals in the future that are in similar situations.

“I’ve always been fascinated with birds of prey and stuff and animals, and I like to volunteer and do things and help not only people and pest control, but animals as well,” Steven said.

He said he had rescued an owl before in the past so this was not the first time he has rescued a bird while on the clock. Wild At Heart has allowed him to name the bird and Steven said he decided to name her after his daughter.

“I named her Lucena, after my daughter,” Steven said.

Watch Footage Of The Hawk Encounter Below