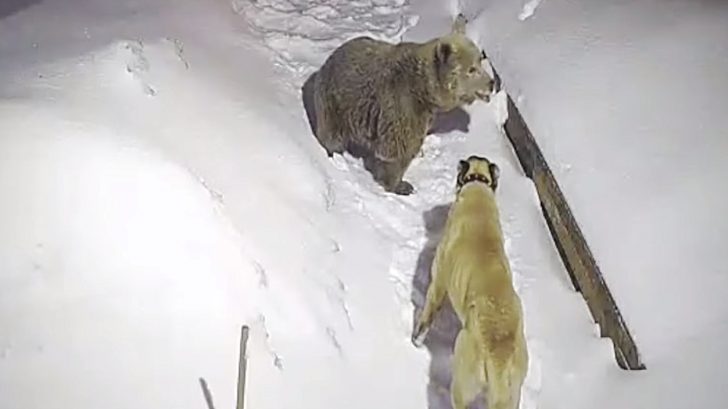 An incredible video coming out of the snowy Turkish town of Bursa shows the heroic moment two dogs fought off a bear to save their owner’s life!

The video showed him standing outside of his home, watching over his dogs as they relieved themselves.

Near the home is a mountain forest and the man is looking in that direction before he jumps in fright as he sees this rampaging bear running out of the forest towards him and his pups.

The man started heading back towards the safety of his home as his two dogs took off running at the bear to slow it down before it got to him.

The bear then charged the dogs and chased them back into camera view. They turned around to stand their ground against the bear.

One of the dogs then stepped back and let the other dog take the bear on in a one-on-one fight.

The brave dog astonishingly locks paws and fights with the young bear before it geniously gets the bear to chase it away from its owner’s home.

At that point, both the dogs run off and the bear stops advancing on them and runs back into the nearby forest to try and find its food someplace else.

Authorities said that neither the dogs nor the bear showed signs of being wounded from the face-off. Nevertheless, the owner was very proud of his dogs for keeping the predator back.

Watch The Dogs & Bear Fight Below