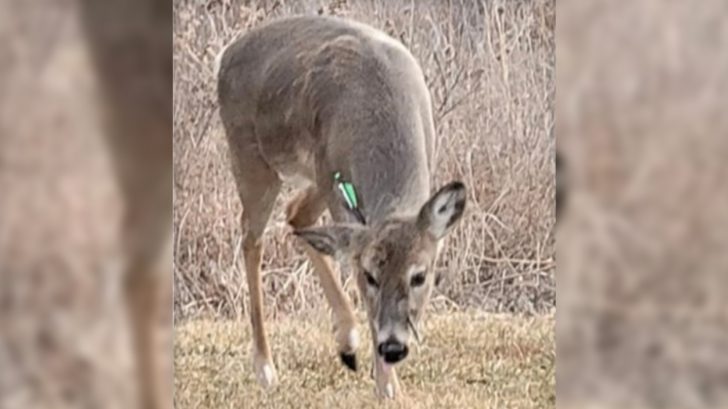 Collin Buth from Milwaukee, Wisconsin was cycling with his daughter through Whitnall Park like they normally do when he spotted a doe walking through the brush with an arrow from a crossbow sticking out of its head.

“My daughter and I ride mountain bikes a lot at the Alpha Trail and I stopped to take a video to send to her. That’s when I noticed the deer actually had an arrow in its head. I just now recently looked at photos and saw it was coming out the front also,” Collin told CBS 58.

Since the video was been filmed, the deer has been spotted multiple times by residents in the area and the staff at the Wehr Nature Center confirmed they have received multiple reports on the animal.

A conservation warden with the Department of Natural Resources said that the arrow definitely came from a crossbow and they’re aware of this specific doe and are monitoring its situation.

The department also added that they have received several reports of illegal hunting activity in Whitnall Park, which has left many of the locals very upset.

“I’ve never seen anything like that in Whitnall Park. It’s unfortunate because it’s such a nice area for nature watching. It seems like there is an illegal poaching problem in Milwaukee County parks,” said Collin.

“It’s very disturbing to see that. I’m glad at least there is not a great degree of distress,” Carly said.

VP Angela Speed with the Wisconsin Humane Society said the deer appears to be able to be a very mobile and active animal, even with the terrible face injury.

She said the arrow “hasn’t seemed to impact the deer’s ability to survive. We’ve referred callers over the past few weeks to the DNR, as we do in most cases involving deer. We are unable to treat deer in-field or intake adult deer for rehabilitation because of both resource and regulatory issues,” Angela said.

Watch Footage Of The Deer Below