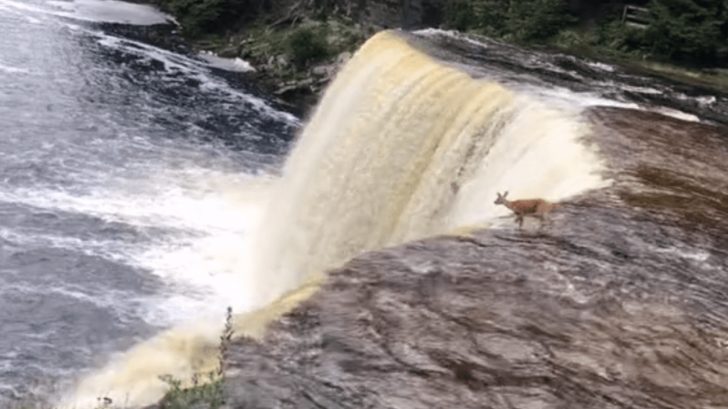 TikTok user Cas_Has was at Tahquamenon Falls State Park in Michigan when she filmed a deer surviving falling 50ft off a waterfall and swimming away unfazed.

The video she shared on TikTok showed a deer running down the shallow river that led towards Tahquamenon Upper Falls. The deer appeared very unfamiliar with the area because of how fast it was moving towards the edge of a 50ft waterfall that poured onto rocks and a pool of water below.

“It has a drop of nearly 50 feet and is more than 200 feet across. A maximum flow of more than 50,000 gallons of water per second has been recorded cascading over these falls,” Michigan.org said.

Onlookers were gasping for air and watching in suspense as they witnessed the deer try to stop at the waterfall’s edge before slipping and getting taken over by the current. The deer fell the entire 50ft down and disappeared below the water.

Cas panned her camera as she ran around the viewing deck to try and look for the deer at the bottom of the waterfall. After searching for a few seconds, lo and behold, she spotted the swimming, with its head above water.

It was headed out of the falls and swam past a mass of natural bubbles until it made it to the shore where it could walk onto dry land. The deer ended up walking off into the nearby woods apparently unharmed.

Tahquamenon Falls State Park is one of the biggest waterfalls in the eastern United States and the deer was very lucky to have survived such a fall. It’s even rarer that someone caught the incident on video.

“The falls can be viewed from the river bank or from the island, which can be reached by rowboat rented from a park concession. The island walk affords a view of the falls in the south channel,” Michigan.org said.

Watch Video Of Deer Falling Off Waterfall Below

Reply to @_bumblebeebutt_ Ok, so this is the full video without music. ##michigan ##waterfall ##deer ##tahquamenonfalls