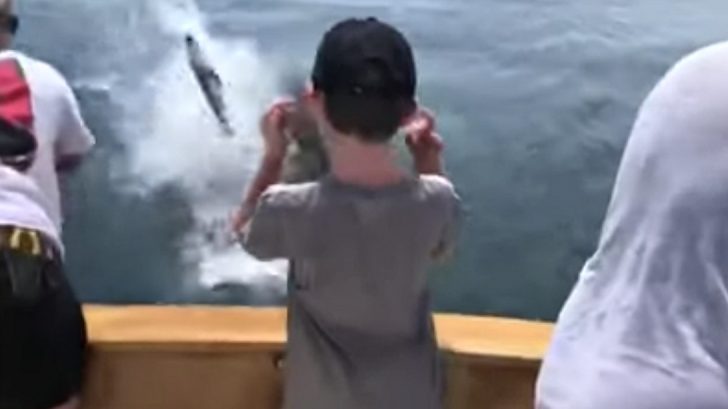 A group of Massachusetts boys got the scare of their lives during a recent fishing excursion in Cape Cod. In a video captured by Doug Nelson, one of the boys is seen reeling in his catch with the help of a female passenger. The other passengers are excitedly watching over the edge of the boat when they get an unexpected surprise.

Doug’s son, Jack, was standing especially close to the boat’s edge as his friend’s catch is reeled in. As the fish nears the boat, a great white shark suddenly emerges from the water to snatch the fish. The startled passengers quickly back away from the edge of the boat as they try to process what had just happened.

Incredible footage today from Doug Nelson of Franklin, MA fishing aboard the Columbia out of Rock Harbor in Orleans. @MA_Sharks pic.twitter.com/rK3yk5j6SG

“Holy shizzle! Dad, that was at my fingers. I almost don’t have arms,” Jack says in the video.

The shark didn’t get away with the entire fish. The boys reeled in what remained on their line to find that half of the fish remained. “It was crazy just seeing the head and you could see the marks from the teeth,” Jack told media.

The Atlantic White Shark Conservancy posted the video on Twitter, where it quickly went viral. The conservation group says it is a confirmed white shark sighting, and the shark was estimated to be about 8 feet long.

It is no doubt a story that these friends will be telling for years to come.