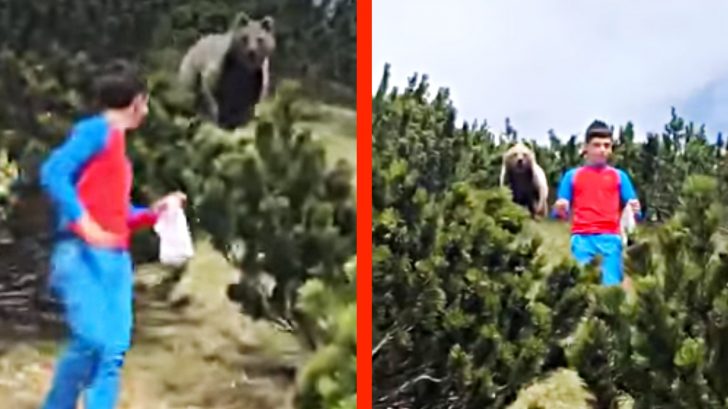 On a family’s hiking trip in Italy, they got a surprise of a lifetime when their son came down the hill after collecting pine cones and had a bear following not too far behind him!

In the video recorded by his stepfather, Loris Calliari, 12-year-old Alessandro is seen nonchalantly walking down the hill towards his stepfather. Not long after, a large brown bear comes into view curiously following the boy.

Calliari is heard calmly coaxing his stepson to keep walking slowly down the hill. As he maneuvers through the bushes and down the trail, the bear is seen creeping up behind him.

The family shared with CNN that around six of their family members had set out on an excursion that day not far from their home in the valley.

Alessandro went off to collect pine cones in the bushes, where the family believes he may have disturbed the bear sleeping. The bear was identified as a Marsican brown bear.

When Alessandro realized the bear was following him, he asked his stepfather to take a picture of him with the bear because he loves animals. He remained calm and at one point commented on how cool it was to have a bear following him.

After the bear followed him down the hill for a bit, it eventually lost interest and went the other way and can be seen running in the field.

Watch the incredible video below!