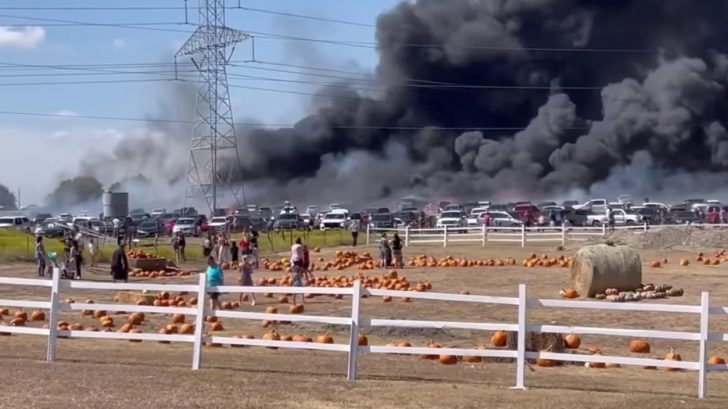 On Saturday, Oct 15th, 2022, a monstrous blaze destroyed 73 vehicles that were parked in the parking lot next to a pumpkin patch owned by the Robinson Family Farm in Temple, Texas.

Video footage showed bellows of smoke rising into the air as panicked onlookers watched from a distance and many of them had cars there that were exploding before their eyes.

“We saw black smoke, and we’re like, something legit is on fire,” eye-witness Kat Cabana, who saw her car destroyed by the fire, told Dallas television station WFAA (ABC 8). “You could hear glass exploding, what I assume was tires popping, exploding, people’s gas tanks exploding. The wind was taking the smoke and making it bigger and bigger.”

While the farm portion of the property was not affected by the fire, the grass parking lot beside it went up in flames and was burnt to a crisp.

Robinson Family Farm, which regularly hosts visitors each year released an update on Facebook as to what was going on after the event happened.

“We first want to thank all of our staff, first responders and customers who did everything they could to help us handle the situation we faced with the fire in our parking lot today. We are so thankful to report that no one was harmed & that is of the most importance to us,” the Robinson Family Farm wrote.

Chris Mahlstedt, a Bell County Fire Marshall said that firefighters were able to control the blaze and eventually put out the fire within a few hours.

Mahlstedt noted that it is believed that it was a discarded cigarette thrown into the dry grass that started the blaze, however, further investigation is still ongoing.

He also said that no one was hurt during the incident, however, there were four firefighters and two visitors who were treated for non-life-threatening, heat-related injuries.

Bell County authorities say that there is currently a burn ban in their region due to the extreme drought and heat conditions plaguing the county.

The Robinson Family Farm is a family-owned farm that is open to visitors during different times of the year like Easter, in October, and around Christmas when they sell trees.