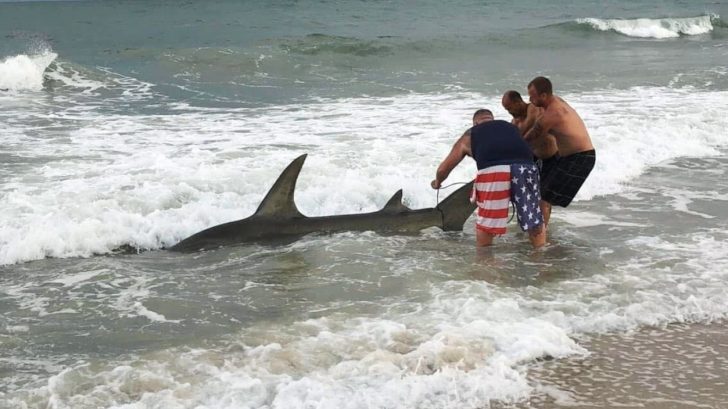 Blake Cochran was super excited to reel in a 13-foot hammerhead shark while fishing on the coast of North Topsail, North Carolina.

Blake said he was standing out on the shoreline with his buddies with his fishing line in the water when he hooked onto the 700-pound sea monster.

“There is no feeling in the world like being hooked to a 700-pound fish from shore. It is literally like being attached to a car that you can’t slow down no matter how much pressure you apply,” Blake told ABC25 WPBF. “It was an unbelievable experience of a lifetime.”

He told officials that he was normally a die-hard bass fisherman until he went into the saltwater about two years ago.

“This sport is extreme,” he told Field & Stream. “We battled with this fish for 45 minutes. The entire time, your physical fitness is being tested. At that point, it is a fight of the fittest to see who will cave first, you or the shark.”

Using the right tackles, rods, baits, and other special equipment to make sure the sharks don’t swallow the hook is all part of their method for capturing the animal while minimizing injuries to it. In just two years, he has caught several sharks averaging in the five-foot range.

“Our number one priority when reeling in these beauties is the fish’s safety and keeping them healthy,” he said. “We take a moment to enjoy the fight and beauty in these creatures and then quickly, safely release them. We swim out with the sharks to around neck-deep water, ensuring the fish makes a fast, strong break back out to sea.”

Video footage showed Blake reeling the shark into ankle deep water on the shoreline. His buddies Chris McCusker and Jeremy Bullard rallied around the shark to pull it onto the sand for a quick picture with it and then to safely remove the hook and drag it back out to deeper water for release.

“The camaraderie it takes to bag a shark of this size is a huge part of the sport,” Blake said. “It took the work of a great team to move lines, swim baits, and get the shark in. The teamwork made for such a good time and is what allowed me to catch such an amazing animal.”

His other buddy Eric Allain was filming the incredible moment as it unfolded and later posted the video to YouTube. You can now check out the footage below.