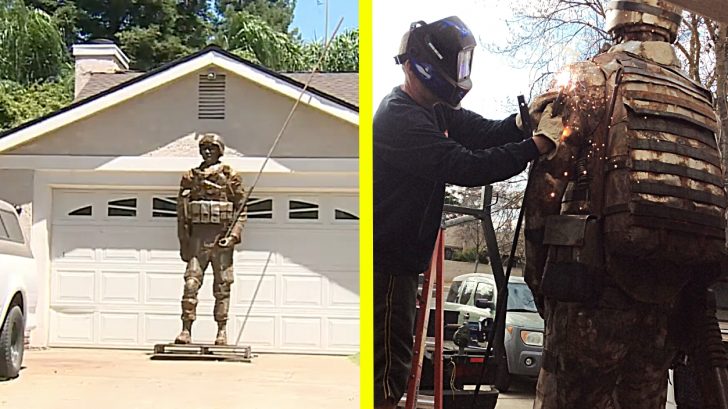 Brandon Greer has been doing metal art for the past 25 years and recently just finished an eight-foot-tall metal statue of a marine.

“He has to look tough and he has to be what a Marine is,” Brandon told KMPH.

The Fresno, California resident served in the military himself and feels it’s an honor to pay tribute to the men in uniform. The statue stands outside his home in front of his garage where it gets a lot of attention from folks passing by.

Once the statue is finished, it’s expected to be transported to the Veteran’s Memorial Plaza in Selma, California, and go on top of a five-foot-tall platform. The Marine will also be holding an American flag.

“It’s good to get a reaction, it’s almost like live art,” Brandon says. “Actually a lot of Veterans live in the neighborhood come by and speak to me on a regular basis. They really enjoy it.”

It was originally planned to be unveiled on Memorial Day but the coronavirus pandemic set that back which has given him time to make the statue look more impressive. He says he’s created many art pieces but the Marine has taken longer and is tricker.

Brandon says, “When you’re working in metal like this and making faces, it gets a little tricky. So you want to spend a little more time and make sure everything comes out alright.”

Brandon has over 20 large pieces of metal art on display in the public, including Gargoyles at Iron Bird Lofts in Downtown Fresno, the Dragon Parade in Chinatown, the Lion outside M Street Arts Complex, and a horse known as Running Time at Dry Creek Trailhead in Clovis. The Marine statue is one of three statues he’s been hired to create for the project.

Video Below On The Metal Marine Statue

A Fresno artist is now using his skills to pay tribute to those who have served in the military.https://bit.ly/3h9zuRs