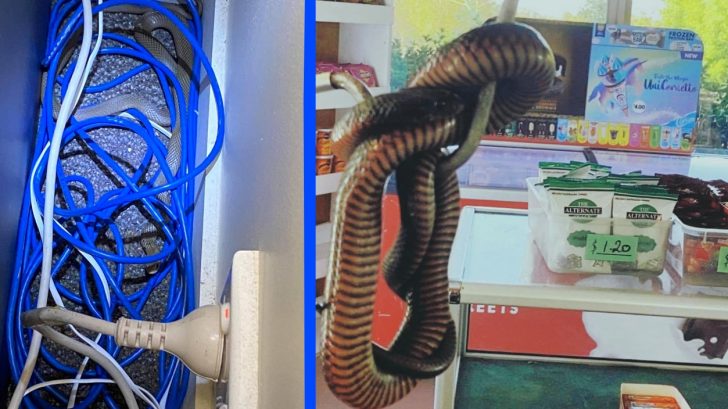 Highly venomous snakes are seeking shelter in the homes and schools around Australia and people are starting to find them.

The owners of the snake catching company N&S Snake Catcher, Norman and Sally Hill have shared multiple pictures of snakes that they’ve been getting calls about to come capture.

Specifically, on December 3rd, one of Australia’s most venomous snakes was found hiding inside a desk at Bundamba State School which is located near a suburb in Ipswich.

“It’s not very often we are called out to schools but a brown snake made its way into an office,” Sally told Brisbane Times. “That was an extremely hot day so it must have come in to keep cool in the air conditioning and it was sitting next to the tables.”

Brown Snake in an office at a school at Bundamba

It doesn’t stop there though, a venomous red belly black snake was found inside a school canteen in Jimboomba, Queensland. N&S Snake Catcher was also called to come safely remove it from the premises. They shared a picture of that snake on their Facebook page as well.

Another snake was also found in the school lunchroom at Augustine Heights, although this little guy wasn’t venomous. He was just a little “cheeky” tree snake. Take a look at him below.