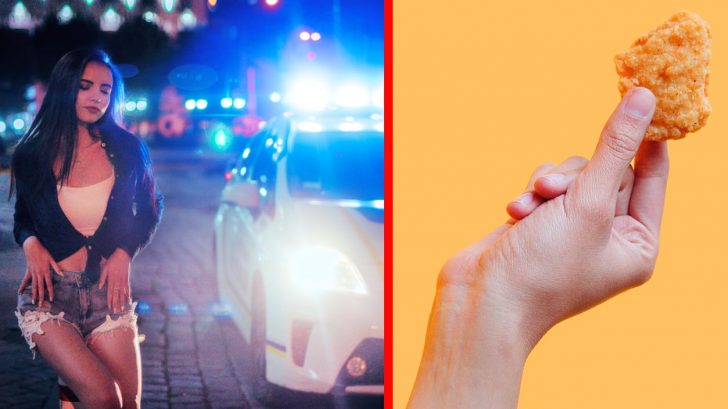 A 24-year-old vegan is wondering if she is in the wrong for calling the cops on her friends for playing a prank on her while she was drunk.

The anonymous vegan took to reddit to explain the circumstances that led to her calling the police on her friends. In her post, she explained she has been vegan “for a good 10 years” and has not eaten any meat since she was “roughly 3-4 years old.”

She said that everyone in her life knows that she is vegan, and was under the impression that everyone respected that fact. “Or so I thought,” she wrote.

While she was at a party with her friends, the woman says she got “white girl wasted.” She claims that her friends then decided to feed her chicken nuggets as a prank.

The woman maintains that she inquired about the nuggets before she ate them, saying she asked her friends, “Are these vegan?” She says they told her yes, they were Sunfed, which is a type of vegan chicken nugget.

Feeling assured, the woman said she ate the nuggets, but felt like something was a bit off. “They tasted off to me but I figured it was just because I was drunk. I was wrong,” she said.

The next day, the woman’s sister messaged her and said to check one of her friend’s Snapchat Stories. The Story contained a video that showed the woman’s friends flashing a normal, non-vegan nugget package at the camera before feeding the nuggets to her. The video also contained the conversation in which the woman asked her friends if the nuggets were vegan.

The woman was horrified, and said she got the authorities involved, “I took a screen recording of the video and took it to the police, on the grounds of food tampering, and now 3 of my (ex) friends are facing charges,” she wrote.

She said her friends think she’s overreacting to what they called “a ‘harmless prank.'”

“In my view, they took advantage of my drunken state, tampered with my food, and publically [sic] humiliated me. In their view, it was just a prank,” she wrote.

The poster received a wealth of support in the comments, with many users saying her friends were wrong to mess with her food and trick her like that. It was also mentioned that those who aren’t used to eating meat can sometimes get sick after eating it. Because the woman hadn’t had meat since she was a child, she could have fallen ill from eating the chicken nuggets.

You can read the full post here, or in the image below.

This isn’t the first time in recent memory that a vegan has gotten authorities involved. In September, a vegan woman’s story went viral after she announced she was suing her neighbors because of the BBQ smell that comes from their yard. You can watch a news report about that below.

What do you think about the case of the vegan woman who was fed chicken nuggets? Did she overreact, or was she justified in calling the cops?