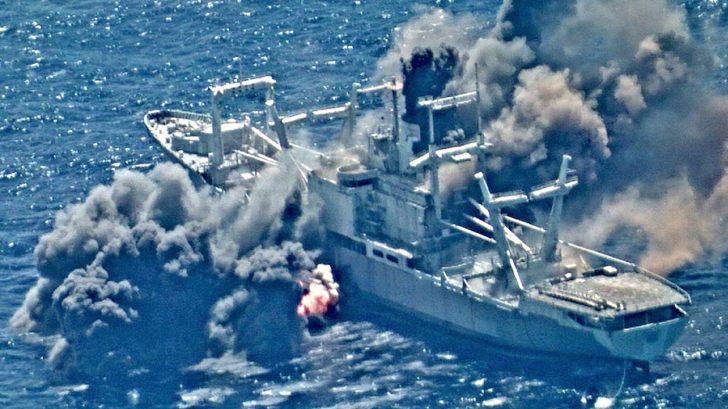 Using live fire from ships and aircraft participating in the Navy’s Rim of the Pacific (RIMPAC) training, the decommissioned amphibious cargo ship ex-USS Durham (LKA 114) was sunk by missiles off the coast of Hawaii.

The sinking exercise (SINKEX) provides participating units the opportunity to gain proficiency and confidence in their weapons and systems through realistic training that would otherwise be impossible to replicate in simulators.

According to the Navy’s website, each SINKEX is required to sink the hulk in at least 1,000 fathoms (6,000 feet) of water and at least 50 nautical miles from land. Surveys are conducted to ensure people and marine mammals are not in an area where they could be harmed during the event. In addition to this criteria, each hulk goes through a rigorous cleaning process where all harmful chemicals and trash are removed prior to sinking. Even the fuel tank is scrubbed clean to ensure minimal impact on marine life.

The hulk that was sunk was a Charleston-class amphibious cargo ship commissioned on May 24,1969, and was decommissioned on February 25, 1994. The ship was named for Durham, North Carolina, and served during the Gulf War.

Watch the video below to see the sinking exercise below.

A 51-year-old Navy ship was shot up as part of a sinking exercise.

A 51-year-old Navy ship was shot up as part of a sinking exercise.https://go.turnto10.com/32UmM2Y