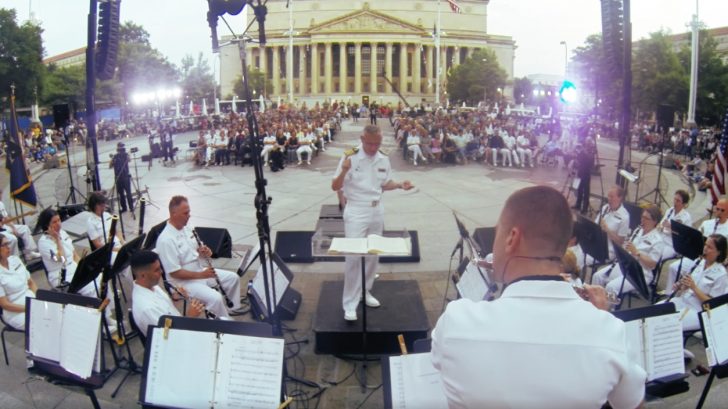 On May 31st, 2020, the United States Navy Band posted a performance of Navy vocalists and instrumentalists performing at a Navy concert in 2019. The military performed “Circle of Life,” a song from Disney’s 1994 movie The Lion King.

USNB described the concert as “one of [its] most popular selections from 2019’s Concerts on the Avenue series.” Among the leading musicians performing were Rachel Sarracco, Shana Sullivan, and Danlie Cuenca.

The video of the performance went viral with 1.2 Million likes, 463k shares, and 57k comments as of press time.

The majority of the people commenting on the video reached the same conclusion: it is an “amazing and touching performance.” The energy the military singers and band exuded was exceptional.

“This bought me to tears because this song has a lot of meaning. What a beautiful rendition. Thanks for serving our country. Music brings us together,” Mildred Sanchez stated on Facebook.

The talent of the singers was also largely acknowledged by the natives with regard to language mastery and pronunciation.

“Thank you for singing the song so perfectly. You mastered the pronunciation. Zulu song from South Africa,” Sandisiwe Nkukwana wrote.

Some people felt a strong power of humanity, dedication, and spirit in this performance. What was more heartwarming is this was sung by men and women serving this country and displaying their musical talents with no motivation other than for the love of playing.

Lion King – Circle of Life, He Lives In You

One of our most popular selections from 2019's Concerts on the Avenue series was our Lion King medley, featuring Chief Musicians Rachel Sarracco and Shana Sullivan, and Musician 1st Class Danlie Cuenca. Let us know what YOU think!