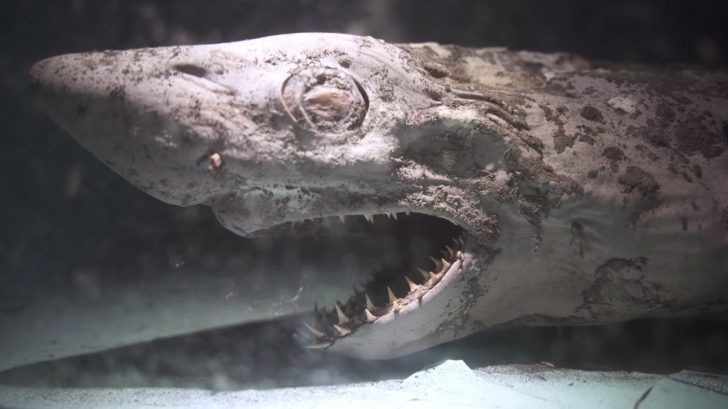 Urban explorer Juliette shared footage of exploring an abandoned aquarium museum in Spain and stumbled upon one of the scariest discoveries she has ever found during her explorations.

The YouTuber shared her discovery on her YouTube channel Juj’Urbex showing a zombie-like shark and other creatures that were found inside the abandoned aquarium.

She and her friend can be seen in the video crawling through a broken window to get into the old facility.

Once inside, they started searching the aquarium facility with flashlights, finding many mysterious objects, including a giant body of a squid that was actually plastic and fake.

There were also busted jars of decomposing animal carcasses, like an eight-legged octopus, found laying on the floor.

According to local authorities, the shark was long dead before the aquarium shut down and was simply left behind with the other dead sea creatures that can be found there.

The shark used to be preserved in a glass aquarium display but the glass was busted a while back and the shark began to decompose.

The formaldehyde water in the tank that was used to preserve it, however, with the water now drained and the shark being exposed to the air, it’s started to form a zombie-like look with rotting muscles and visible bone structure.

“I was surprised to see this shark. It made me sad, even if it was already dead before the place was abandoned.  Above all I wondered why it had never been removed.” Juliette said, according to iHorror.

See Full Footage Of The Abandoned Aquarium Below