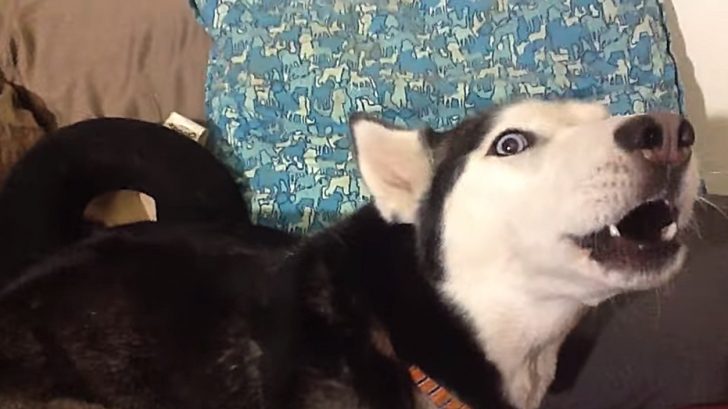 On December 5th, 2015, a husky owner filmed a funny video showing the personality of her beloved dog after it got upset when her owner tried to help remove some fleas from her fur.

Husky Can’t Stop Singing Her Favorite Song Even Though She’s Mad At Her Mom https://t.co/Tkn5djZkyi pic.twitter.com/jd5r6tAPkf

She said she just sprayed some flea spray on her dog named Mya and the husky wasn’t too happy about it and got an attitude over it so she just laid on the couch as her owner filmed her.

The lady tried to get the dog to look at her by calling her name but the husky didn’t want to make eye contact at all. She called Mya’s name over and over again but nothing, she wouldn’t budge. Getting desperate, her owner whipped out the secret weapon that always gets Mya’s attention – she started singing the song “Tomorrow” from the 1982 classic movie Annie.

“I put a flea spray on her and she got mad at me. She wouldn’t look at me. So I sang her favorite song to get her to forgive me,” she wrote in YouTube.

As she began singing to the dog, Mya couldn’t help but sing along with her. It was perfect. Mya sang right on cue, however, she still wouldn’t look at her owner because she was still upset. Eventually though, with enough singing, Mya finally turned around and looked at her. It’s completely adorable, take a look at this in the video below!