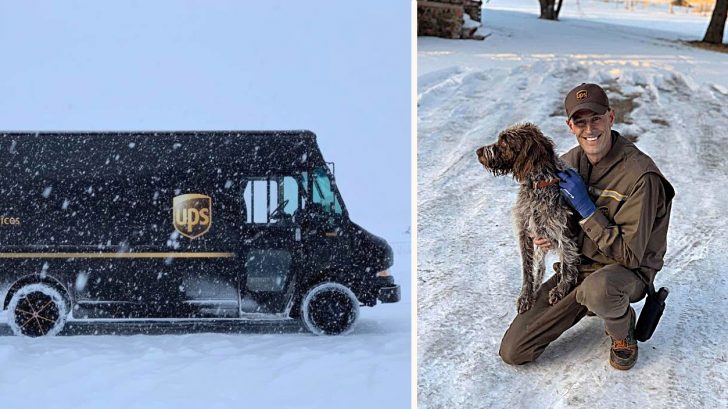 An incredible story has surfaced about a man from Montana named Ryan Arens who was on his delivery run for UPS when he spotted a dog that fell through the ice of a frozen lake.

“This dog was screaming and crying and going crazy,” Ryan told the Great Falls Tribune. “I could see the dog trapped about 10-15 feet off of shore, with ice all around it.”

Ryan pulled his vehicle to a complete stop and got out to investigate the situation. As he walked down to the lake he saw an older man, the dog’s owner, trying to use a rowboat to reach the dog but he couldn’t do it.

At this point, Ryan grabbed the rowboat and tried to get out to the dog himself by distributing his weight in the boat and sliding it onto the ice. The boat broke through the ice and part of him fell into the water. Already wet, Ryan decided to just swim to the dog.

Posted by PETA (People for the Ethical Treatment of Animals) on Wednesday, January 23, 2019

The dog was going under fast but fortunately, Ryan was able to grab the pup and get her safely back to shore. They took Sadie, the dog, back to the elderly man’s house who happened to be a retired veterinarian and got the dog into the shower to get her body temperature back to normal.

Ryan warmed up too and they both made a full recovery. Once PETA, the largest animal rights organization in the world, found out about Ryan’s actions they honored him with the Compassionate Action Award for saving Sadie.

“I didn’t think—I just knew what I had to do,” Ryan told PETA. “The veterinarian said that 2 degrees colder and Sadie would have gone into cardiac arrest. The timing was perfect.”