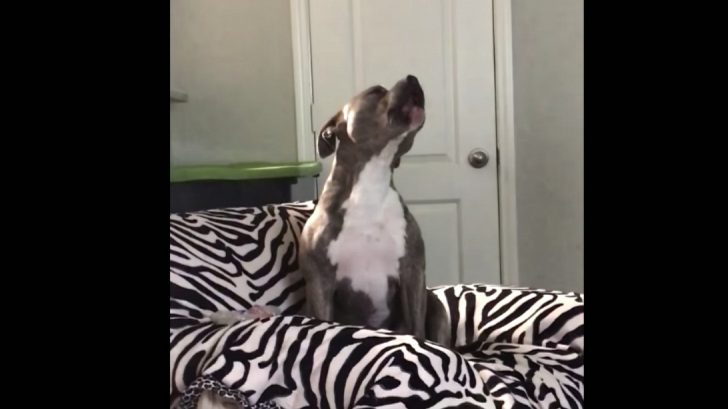 “Tennessee Whiskey” is arguably the most popular song of the past decade, thanks to Chris Stapleton’s stunning rendition and his joint performance of the song alongside Justin Timberlake at the CMA Awards in 2015. The song, originally sung by country greats David Allan Coe in 1981 and George Jones in 1983, has been covered by numerous artists and has made stars out of the most unsuspecting of singers including Texas dad, Kris Jones, who went viral in January 2017 with his rendition.

But, until now we’ve never heard a dog sing the classic country tune. Unlike many of the singing dog videos we’ve seen in the past, a clip from Brin Morris of her pit bull, Tank, singing along with Chris Stapleton’s rendition of “Tennessee Whiskey” literally made our jaws drop. Not only does Tank sing, but he sings on key!

The clip opens with Tank’s owner telling Alexa to play music by rapper Cardi B. The dog is uninterested and definitely unimpressed. Then Morris tells Alexa to play “Tennessee Whiskey” by Chris Stapleton. Tank immediately starts singing along.

The video has amassed more than 1.5 million views and nearly 40,000 shares since it was posted to Facebook, making Tank the latest viral superstar.

We think that you’ll agree that the only better than a singing dog is a dog singing country music.