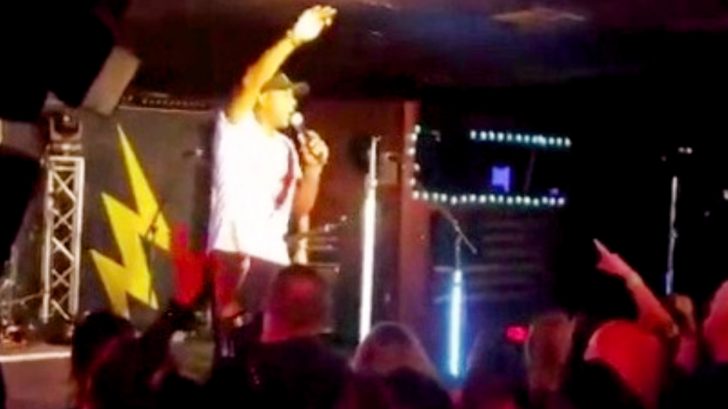 Don’t Act A Fool At A Country Star’s Show

Whenever you take alcohol-fueled people and cram them together, crazy things can happen. Unfortunately, country concerts are not not immune to such disturbances.

Most scuffles go relatively unnoticed, as they occur in a bigger venue or toward the back of the crowd. But fights are much more noticeable when they break out in a smaller venue or near the front of the stage.

Sometimes, a misbehaving fan can even be spotted by the artist. And many times, the artist makes it clear that such behavior is not acceptable.

For example, back in 2008, Tim McGraw famously had a man thrown out by security after he witnessed him attacking a female concertgoer. McGraw actually attempted to drag the man up on stage himself before the security team came to his aide.

More recently, Miranda Lambert took matters into her own hands when a rude fan was causing a disturbance at the Pistol Annies‘ October 2018 Ryman show. The fan was up against the stage and refused to move, even after security rolled in and Lambert called her out.

“Alright, I’m not gonna have you stealing our show tonight. You’re gonna have to go sit down,” Lambert said. “This is our night right here, sorry.”

But when the fan didn’t listen, Lambert handed her guitar to her bandmate Angaleena Presley to speak to the woman one-on-one. They chatted for a few seconds before Lambert took her hand and led her away from the stage herself.

As you can tell, country stars don’t take too kindly to fans who cause a disturbance at their shows. The same can be said of Jimmie Allen.

One of the freshest faces on the country music scene, Allen hit it big with the release of his debut single, “Best Shot,” in 2018. The song topped the U.S. Country Airplay chart, and crossed over to claim the 37th position on the all-genre Billboard Hot 100.

With a hit single under his belt and a second single to promote, Allen has been busy touring across the country. One of his latest shows took him to Ohio, where one fan started to get a little too rowdy for the singer’s liking.

According to one concertgoer, who filmed what went down, the fan had started to pick a fight in the crowd and Allen noticed. At first, Allen simply tried to get the fan to calm down, telling him to “relax.”

But Allen soon changed his mind, deciding that he wanted the troublemaker taken out of the venue so everyone could enjoy themselves again.

I think the moral of the story here is that you shouldn't start a fight at a Jimmie Allen show or else he'll throw you out!! https://t.co/1TcIYwnerB

He brought the show to a halt as he called on security to whisk the man away.

As security rushed in to get the man out of the venue, Allen had a few last words to share with him. “We’re trying to have a good time…so roll out, homeboy,” he said. “We’ve got your money already. Appreciate you.”

The crowd seemed to appreciate Allen’s intervention! You can watch how it all went down by tuning in to the video below.