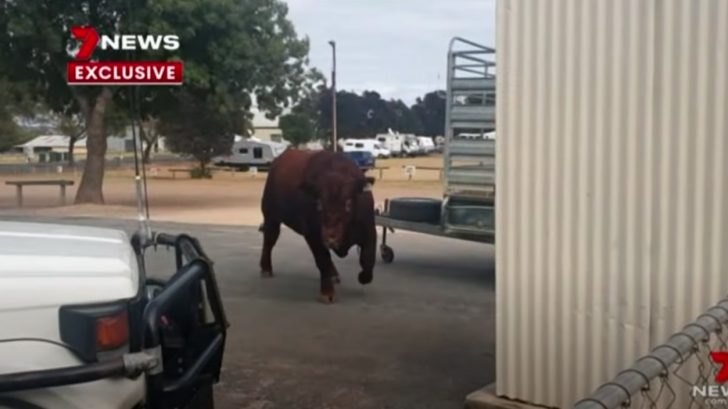 Trudy Robinson was at her home in Murray Bridge, South Australia when she noticed a testosterone-filled bull on the loose running up and down a road. Behind it, a few cattlemen following behind trying to catch the beast.

7NEWS Australia reported that the bull was on the back of a trailer going down the road when the door malfunctioned and the animal escaped. Video footage showed men trying to lead the bull away from the city to a safe place where it could be captured.

“An unruly bull, broke free and was determined to stay that way,” 7NEWS Australia wrote on YouTube.

At one point, about two miles from where it got loose, the bull was seen walking across a bridge crowded with cars full of nervous people hoping the bull doesn’t turn towards them. Campers and other onlookers at Murray Bridge Showground watched as they tried to use trucks and fences to pin the animal with no luck.

People from all over began to join in on the chase, and with everyone’s help, police were finally able to help wranglers capture the bull. They loaded it back into the trailer and used a rope to secure the tailgate door shut so this time he couldn’t escape.

Watch Footage From The Bull On The Loose Below