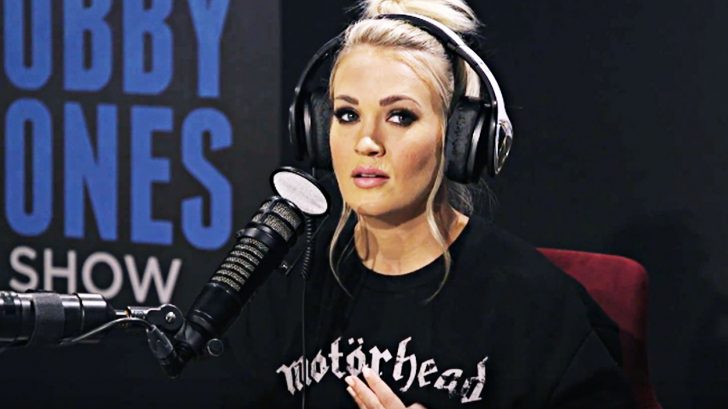 An international news story that has garnered an unimaginable amount of attention from people all over the place, Carrie Underwood suffered a fall that changed everything she had been working for – and gave way to a whole new side of creating music.

In a tell-all interview with USA Today, Underwood explains how she was unable to sing following a fall in November 2017 – that left her with more than 50 stitches in her face…and changed the way she sang.

#CarrieUnderwood is shutting down rumors that her accident, which resulted in more than 40 stitches and a broken wrist, was a stunt to cover up plastic surgery. https://t.co/1MwtM5YgOd

Rumors swirled following her fall, including some unscrupulous people on social media claiming that she had undergone plastic surgery and it was merely a cover story.

But beyond just breaking her wrist and cutting her face open, the injury forced her to delay her newest album Cry Pretty – and on top of it all, she couldn’t even sing.

Carrie Underwood Says She Needed More Than 40 Stitches After Fall: Carrie Underwood's recent fall may have been a bit more serious than fans first thought. In a letter to her fan club members obtained by E! News, the country music superstar says she… https://t.co/nn2o5NoaxI pic.twitter.com/fp682rhTFG

The accident fully derailed her album because she had not recorded vocals for it yet, and now couldn’t sing. It took her months to be able to return to the studio and even when she did, her confidence in her singing had changed.

Working with several well-known and famous songwriters along with co-producer David Garcia, she instead decided to focus on penning more songs for the now-delayed album. As a result, she’s credited with writing seven of the tracks.

“We gravitated to songs that had a little bit of a different perspective than some of the songs on her past records,” Garcia said. “Great artists want to keep expanding, and we were allowing the songs to speak. We didn’t have any rules. We tried to stay true to ourselves. People don’t realize this, but she’s just an incredible songwriter.”

With Garcia’s help and support, Underwood also worked on producing a lot of the album. Having her hand in the pot for almost every step of the way, this quite literally became her most-involved and personal album she’d ever created. It was a project she saw from beginning to end and helped shape at each stage.

When she finally began to record the tracks for the album, she needed Garcia’s help to ensure her singing was fine because of how different it felt after the accident.

Now, her latest album is set to drop on Friday, September 14th, 2018 and is one of her most loved projects to-date. Something she says, she couldn’t be happier about.

Watch the interview below where she talks about the in-depth creative process for Cry Pretty and check out her new music video for “Love Wins.”