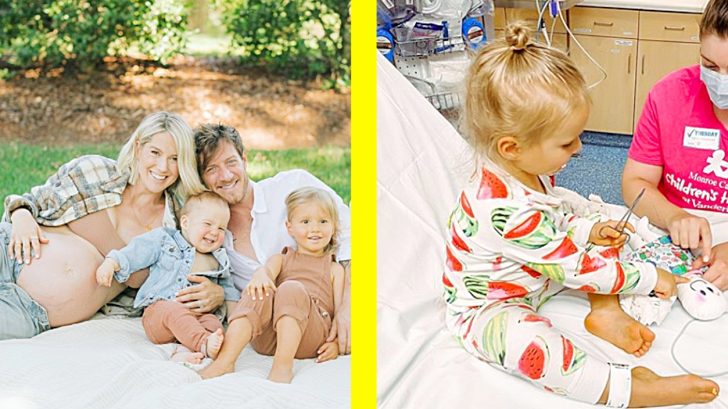 On Wednesday, September 16, 2020, Tyler Hubbard of Florida Georgia Line posted a video and a couple of pictures on Instagram, revealing that his two-year-old daughter, Olivia, had to go to the ER after she busted her chin on a coffee table at home.

In the video, Tyler explained that they were at the ER and it was actually his pregnant wife’s due date, however, they were there to fix up his daughter’s chin instead of having a baby. Tyler chuckled at the irony of all they have going on and that not only does his very pregnant wife have to deal with their two young children, but him as well since he is hobbling around with an ankle injury from a dirt biking accident that happened at the end of August.

Doc said his goal was to have me walking in 5 weeks. Hayley and I said “make it 4 weeks because that’s when baby number 3 gets here.” Keep our family in yalls prayers. We are going to need it. Now I’m going to muster up the energy to hobble to the toilet. #badtiming

“Well, we are at the hospital. It’s Hayley’s due date, so we should be here delivering a baby, but we’re actually here getting Liv’s chin stitched up. She fell this afternoon in the living room and busted her chin open on the coffee table. I got a lame foot and Hayley’s about to deliver a baby any minute and this is our Wednesday night.”

While filming the video you can hear Tyler’s wife, Hayley, telling their daughter that she “was so brave” while getting her stitches in her chin. Liv proudly responded in the sweetest angelic voice. “I was so brave!” In which Tyler replied, “You were so brave! I am so proud of you.”

Watch the adorable video below!

Not exactly what we expected on hayley’s due date, but that’s life. We getting good at hitting these curve balls 2020 keeps throwing at us. Shout out to @vumcchildren for taking such good care of our angel.