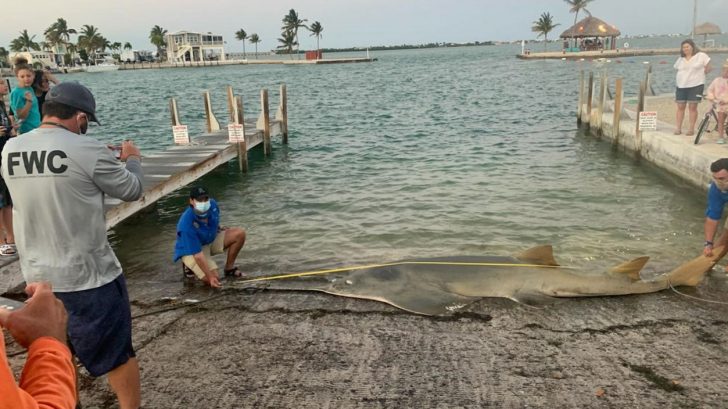 The largest sawfish ever measured by scientists washed up dead in the Florida Keys last week.

The sawfish is an unusual-looking species of fish simply because of the fact that they have a saw protruding from their skulls. This bony structure is known as a rostrum, and it’s typically about 1/3rd the length of the entire body. The saws are used to sift through the sand on the ocean floor and break prey down into consumable-sized chunks.

There are five species of sawfish and each one is listed as endangered or critically endangered by the International Union for Conservation of Nature.

This makes it all the more unfortunate that two enormous sawfish washed up to shore. One of the sharp-snouted fish was a mature,16-foot-long female with eggs the size of softballs found in her reproductive tract. Biologists estimated the fish weighed around 800-1000 pounds.

Scientists are now studying her carcass to determine her age and to learn more about her reproductive past.

The other sawfish was an immature female that measured 11-12 feet long and weighed an estimated 400-500 pounds.

Gregg Poulakis, a fish biologist at the Florida Fish and Wildlife Conservation Commission explained that even though losing these beautiful fish is sad, there are many things researchers can learn from this. He told Live Science:

“Although it’s a sad occurrence when a big animal like that dies, from a scientific standpoint we knew we could learn a lot from it. That makes us feel a little bit better about having lost such a big female.”

One of the fish was discovered near Cudjoe Key and the other near Marvin Key. They were found far enough apart that the timing of their deaths is most likely coincidental according to Poulakis.

For more on the unique sawfish, watch the video below!