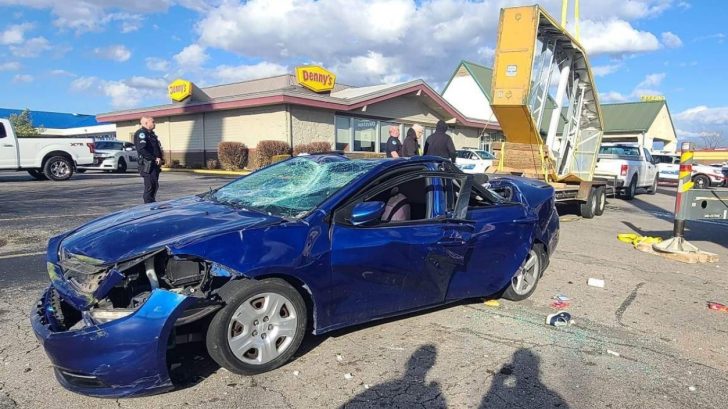 A tragic incident occurred in Elizabethtown, Kentucky, where a falling Denny’s sign fell on top of a car, resulting in the deaths of two people.

Lloyd Curtis, one of the three people inside the vehicle at the time of the incident, died in the hospital Monday morning, according to his granddaughter, Amy.

The other person who died was Lillian Curtis, who was taken to University Hospital but later passed away. The third person in the car was also injured but no further information was provided.

According to Elizabethtown police, they received reports of the restaurant’s sign falling from a pole and landing on a car around 1:30pm on Thursday.

Police spokesman Chris Denham stated that wind appeared to be a factor in the incident.

This tragic incident serves as a reminder of how crucial it is to ensure the safety of the public by ensuring that these structures are secure and stable, especially during adverse weather conditions.

A GoFundMe page was started so people can donate to ” help for the memorial service and to get me to KY to be with my family cause I live over 2000 miles away. Please keep my family in your prayers for this is a very difficult time for all of us.”

Our thoughts and condolences go out to the families and loved ones of Lloyd and Lillian Curtis during this difficult time.