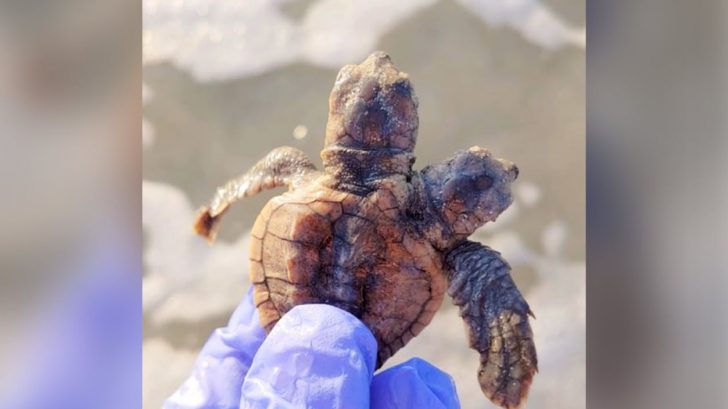 You may have seen the headlines in 2019 about the now-famous two-mouthed fish that was caught in Lake Champlain, New York. The unusual fish was originally caught by a woman who released it back into the water after taking a photo.

A week later, the two-mouthed lake trout was believed to have been caught yet again, this time by a man named Bryce Collins. Like the woman who caught the fish before him, Collins snapped a photo before releasing the fish.

Since the original two-headed fish had been released, there’s no telling if this fish was the same one caught by the woman the week before. But we have a pretty good feeling it is!

It turns out that the famous Lake Champlain fish isn’t the only two-mouthed creature to make the news in 2019. There was another creature with two mouths on the loose that year, only it has two mouths because it has two entirely separate heads!

The Sea Turtle Patrol for Hilton Head Island in South Carolina was combing the beach when they came across a remarkable creature. The team found a two-headed sea turtle hatchling while conducting inventory of a turtle nest.

“Yesterday on patrol during a nest inventory this bicephalic hatchling was discovered,” read a post on the patrol’s Facebook page.

The patrol’s post stated that while the two-headed mutation is more common in reptiles than other animals, “it is still very rare.”

We thought we had seen it all during this very busy season on Sea Turtle Patrol! Yesterday on patrol during a nest…

The team named the two turtle heads Squirt and Crush after the father/son turtle characters in Finding Nemo. As they do with all live turtle hatchlings they discover, the patrol released the two-headed turtle into the ocean after taking a quick photo.