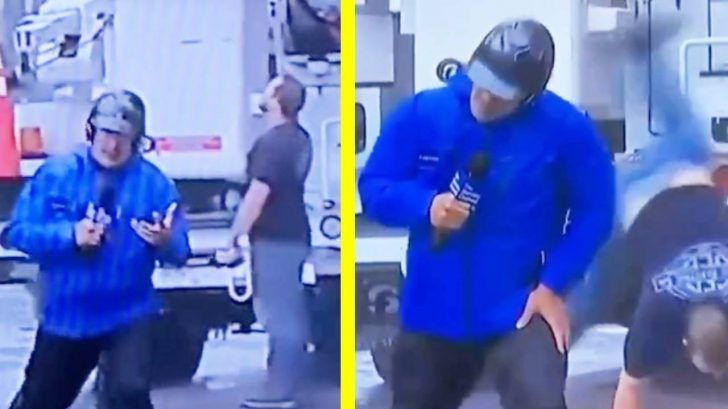 Hurricane Ida is no joke. Millions of Gulf Coast residents are without power – and may be for weeks – while four people have died. The Category Four storm became the second most intense hurricane after 2005’s Hurricane Katrina.

In 3.5 hours since landfall, #HurricaneIda has only traveled 26 miles!!!

That's an average speed of only 7-8 mph ? pic.twitter.com/OacZmKZdPO

Although reporting on Hurricane Ida is serious business, there is one weather man, Jim Cantore, who has been called out for exaggerating how bad the winds have been.

In one tweet, a viewer pointed out that while Cantore was acting as though he was being blown away, a man was walking with ease right behind him.

Just another normal storm for a fan of Jim Cantore ?#Hurricane_Ida pic.twitter.com/P1JDLq97cg

In another, the same man did a cartwheel behind Cantore, prompting a fellow Meteorologist to tweet the video and say, “Meanwhile, you have someone doing a cartwheel behind Jim Cantore as he does his live coverage of Hurricane Ida.”

Meanwhile, you have someone doing a cartwheel behind Jim Cantore as he does his live coverage of Hurricane Ida. ??‍♂️ pic.twitter.com/AYYbeNA148

One more clip of Cantore was posted on Twitter of him attempting to have a conversation with another weather reporter on the air. Both were struggling to stand upright, but two men easily walked right past them without any trouble.

Can’t they even be real with the weather? pic.twitter.com/slAjNRgNlH

This by no means diminishes how horrible the hurricane has been, it is simply to bring a smile to everyone’s face during this hard time.

Can’t they even be real with the weather? pic.twitter.com/slAjNRgNlH