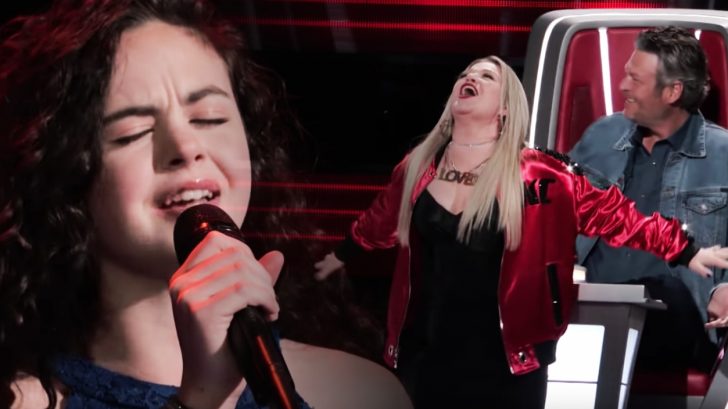 Soaring through the blind audition, this young teenager stole the show when she caught the attention of all four coaches – but this country sweetheart had another surprise coming!

Young Chevel Shepherd is just 16 years old, but she’s got a voice that has a beautiful tone and great power – and reminds coach Kelly Clarkson of Dolly Parton. Needless to say, her country audition was absolutely well-received by the panel on NBC’s 15th season of The Voice.

Guess who auditioned for @NBCTheVoice?! I DID! Don’t miss the season premiere on September 24! #TheVoice #iauditioned pic.twitter.com/fD16bXGmLB

Her small size means nothing for how big of a voice she has and this passionate teen proved that she’s going to give her all with a powerful and pristine cover of The Band Perry’s iconic hit, “If I Die Young.”

Taking the stage in her blind audition, Shepherd donned a blue jumper with a sheer skirt fabric that was retro-inspired and stood there singing her twangy interpretation of this pop-country hit.

Earning three chair turns from Jennifer Hudson, Kelly Clarkson, and – of course – Blake Shelton, she was blown away by the support and praise from these superstars.

“I first started singing when I was 2 years old and would always sing country music,” she told the coaches. “Mostly Carrie Underwood because she’s my favorite. … If I saw Blake’s chair turn around, I would freak out.”

The youngster said that she enjoys being sassy and small in her pre-audition interview. “Big things come in small packages,” she said. And that point is proven with her roaring audition that has a lot of fans picking her as a favorite already!

After earning a turn from both Clarkson and Shelton (who have been battling for country singers this year) young Shepherd had no idea what she would spark after flirting with Adam Levine and blushing after Shelton greeted her.

Ultimately, Shepherd had a choice to make – and she had three coaches to choose from, but her choice not only shocked the audience but the coach she chose, too!

Watch Chevel Shepherd’s incredible Voice audition below and let us know what you think about her choice below!