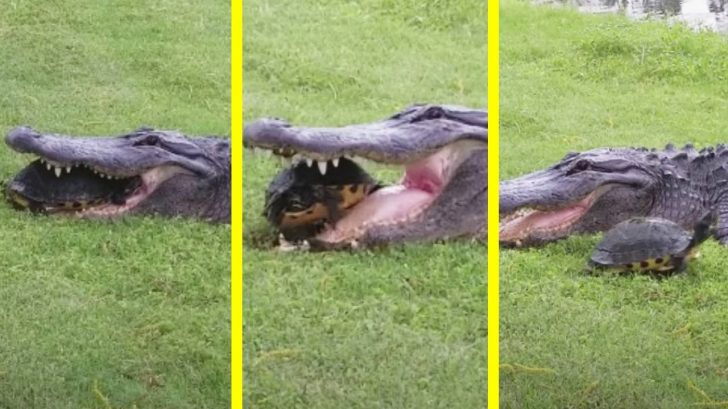 This gator showed up in a Hilton Head resident’s backyard – and he wasn’t alone.

The residents came outside, at a safe distance, to see what the gator had in its mouth. Turns out, it was a turtle!

Now, we have seen many videos where it went one way, but this turtle didn’t give up without a fight. The video begins with the turtle fully inside the mouth of the gator. If we were betting people, we’d bet the next thing that would happen would be a crunch. But, we’d be wrong!

After a few seconds of fighting, the turtle manages to literally jump out of the gator’s mouth and hop away. We’ve never seen a turtle move so fast!

The video was shared on Facebook in September 2020, garnering 4.3 million views with the caption, “C’ya later alligator.” It was actually first uploaded to YouTube three years ago, where it has over 43 million views.

You’ll have to watch the video below to see the turtle’s escape for yourself.

**WARNING: THIS VIDEO MAY BE DIFFICULT TO WATCH***