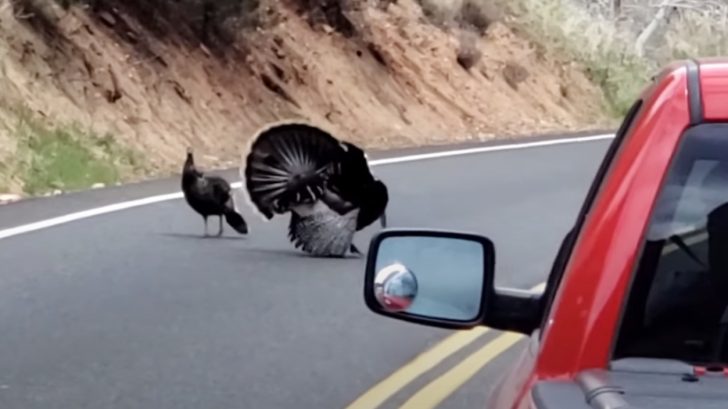 How wonderful it is to watch a flock of wild birds traveling all together! This video footage you’re about to see is very interesting. Drivers on a rural road in Zion National Park, which is located in Utah, were astonished with an unexpected courtship dance by a chivalrous Turkey.

Spectators watched from inside their vehicles as a group of wild turkeys ran down an embankment and crossed the road stopping traffic. Most turkeys quickly dashed across the road, however, one male turkey stood in the middle of the road as if he was the traffic conductor while his female friends safely crossed.

One of the females walking past him attracted his attention and, at this point, the turkey had an audience and the stage was set. He seized his opportunity to perform his courtship dance in the middle of the road.

The male turkey stood straight up and fanned his tail feathers out while dragging his wings on the ground walking circles around her. They danced together and circled each other and it was quite impressive. Breeding season for wild turkeys generally happens from mid-March to June, which was around the time this footage was recorded.

After the couple’s dance was finished, the female turkey crossed the road to join the rest of the flock while the happy male turkey continued dancing for a little while longer. Take a look at the footage below.