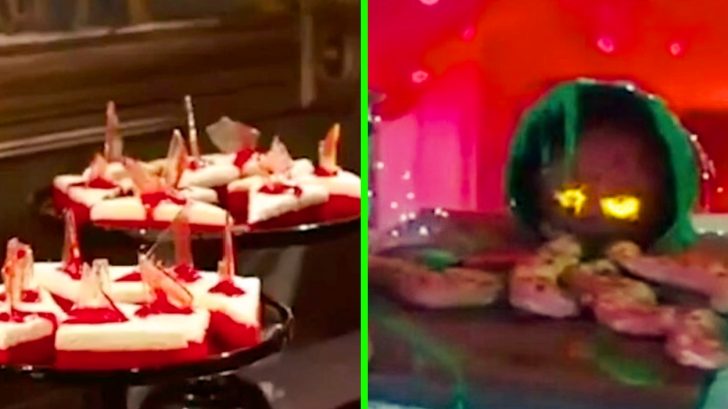 Trisha Yearwood has many titles that can describe her. Country singer, celebrity cook, and Halloween enthusiast are just a few.

During past Halloween seasons you’ve seen Yearwood pull out some pretty elaborate costumes and even more elaborate snacks. As October 31st drew closer in 2018, she geared up for what she hoped was her best Halloween celebration yet.

Of course, the key to hosting a howlin’ good Halloween party is to have the perfect spread of spooky snacks. Yearwood definitely had her bases covered where that was concerned.

Not wanting to leave her fans in the shadows, Yearwood graciously shared all of the snacks (and the drink!) she made for her Halloween gathering the. All of the recipes were explained more in-depth during theTrisha’s Southern Kitchen Halloween Spooktacular episode, which aired on October 15, 2018.

But if you missed that episode, don’t be afraid to go ahead and try some of the easier recipes yourself…such as the rat-infested veggie bar with ranch dirt dip.

Looks like all you have to do to make this scary spread is lay out some of your favorite veggies and place plastic rats throughout. The dip is something you may need to wait and hear Yearwood explain on the show, but she did share one key ingredient…crushed toasted pumpernickel bread!

Whatever the dirt dip is made of, it must be tasty, as one of the party guests can be heard saying, “It’s the best-tasting dirt I’ve ever had.”

The creepy deserts are something that Yearwood explained on the show, but that doesn’t keep you from admiring their gory glory in her online clip.

While the creepy candy eyeballs were surely a crowd-pleaser, the bloody cheesecake bars carved a place into the hearts of Yearwood’s guests.

These cheesecake bars may look horrific, but they’re actually delicious. The “glass” you see on top is made of caramel, while the “blood” is raspberry sauce.

Yearwood’s guests washed down the cheesecake bars with a potion brewed from apple cider and Fireball.

If you’d like to learn even more about Yearwood’s spooky Halloween treats, be sure to check out the video below.

Since this episode aired a while ago, have any of you made these treats? We’d love to hear how they turned out!